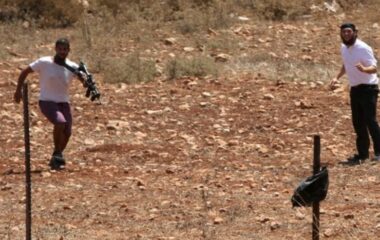 Eyewitnesses said the colonists invaded Palestinian lands and assaulted a farmer, identified as Abdul-Karim Nimir Younis, 60, while working on his hands in the Khallet Hassan area, south of Qalqilia.

The man suffered several cuts and bruises after the colonists assaulted him, and received treatment by Palestinian medics.

They added that the Israeli soldiers arrived in the area, and abducted Sa’id Isamel Younis, 40, from Sneiria nearby village, while he was trying to save Younis.

On Monday at dawn, the soldiers abducted at least nine Palestinians, including former political prisoners, from their homes in several parts of the occupied West Bank, including the occupied capital, Jerusalem.