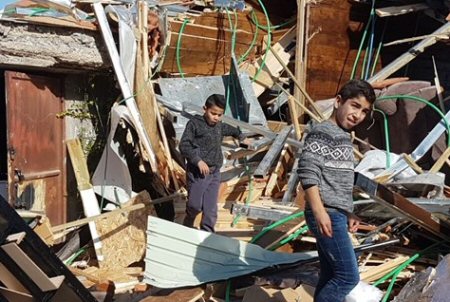 Israeli bulldozers demolished a Palestinian home and a commercial building, on Wednesday, in the Jabal Al-Mukabbir neighborhood, in occupied East Jerusalem.

A Ma’an reporter said that dozens of Israeli forces, along with staff from the Israeli Civil Administration and several bulldozers, stormed the neighborhood and blocked a number of streets.

According to local sources, prior to the demolition, Israeli forces raided a residential building belonging to Mahran al-Mughrabi, and forced him, along with his wife and two children, out of their home. Sources added that Israeli bulldozers demolished the home under the pretext that it was built without a permit.

Al-Mughrabi pointed out that the demolished home measured 200-square-meters and was built nearly two years ago.

Meanwhile, local sources said that Israeli forces surrounded a commercial building, in the same neighborhood, and removed its contents, including computers, desks, and chairs, before the demolition commenced.

The commercial building, which measured 50-square-meters, was also demolished under the pretext that it was built without an Israeli permit.

Sources mentioned that the owner had previously attempted to obtain an Israeli permit three months ago, while building, and that he had received no prior demolition notice from Israeli authorities. Israel uses the pretext of building without a permit to carry out demolitions of Palestinian-owned homes on a regular basis.

Israel rarely grants Palestinians permits to build in East Jerusalem, though the Jerusalem municipality has claimed that, compared to the Jewish population, which sees high approval ratings, they receive a disproportionately low number of permit applications from Palestinian communities. Local sources said that the demolished structure was part of a larger caravan which was donated, by an international organization, to Palestinian resident Nabil al-Hayla.

No reason was given for the demolition.

The report said that the cumulative number of structures targeted so far, in 2018, (251) has remained below the figure in the equivalent period of 2017 (286). All of the demolitions carried out during July 2018 took place under the pretext of lack of building permits.