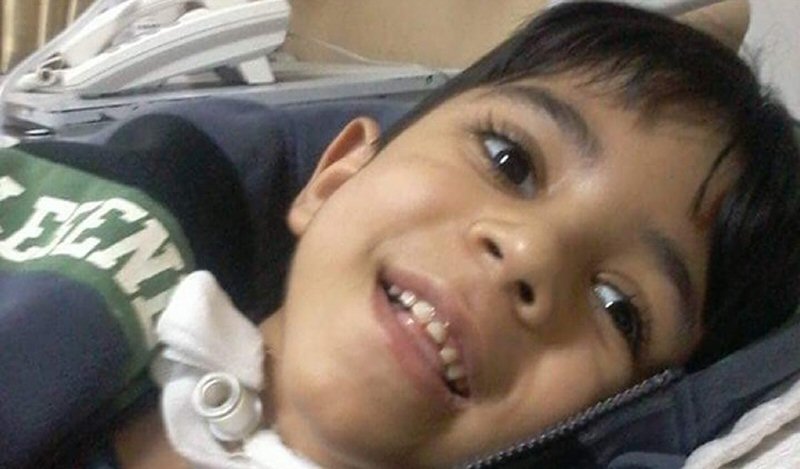 A nine-year-old Palestinian died on December 6, due to injuries sustained during an Israeli drone strike in the Gaza Strip, in 2014.

Mohammad Abu Hdaf, a kindergartner at the time, sustained spine injuries from shrapnel during an Israeli drone strike in Al-Qarara, east of Khan Younis, on August 8, 2014, according to documentation collected by Defense for Children International – Palestine. After a long series of medical interventions including treatment abroad in Turkey and Israel, Mohammad died last Wednesday in the early morning.

DCIP had early documented the death of two children who were members of Mohammad’s extended family during what appears to be the same drone strike, around 5:30 p.m. on August 8, 2014. Mahmoud Mohammad Saleh Abu Hdaf, 8 and Mahmoud Khaled Musa Abu Hdaf, 15, were both killed while going out to collect water, according to DCIP evidence. An adult relative, Suleiman Sameer Abu Hdaf, 21, was also killed.

“Mohammad was injured in the back, but he was standing and that made me feel he had been lightly injured,” the child’s father, Saleh Abu Hdaf, told DCIP, describing the moments after the explosion. Abu Hdaf, himself, along with his wife and several other of his children were also injured at the time.

Abu Hdaf told DCIP he had relocated his family from their home in Al-Qarara before Israel launched a ground offensive in the area on July 18.

Abu Hdaf, accompanied by his wife and five children, including Mohammad, were among many residents to flee the area and return following an initial ceasefire to survey damages to their homes and collect belongings.

According to the child’s father, Mohammad was standing with his four siblings and mother outside the front door of their partially destroyed home on Street 86 when the strike hit directly across the street.

Mohammad was resuscitated and transferred to the nearby European Hospital. He was held in the ICU for 15 days then transferred to Turkey for medical treatment.

Mohammad was in and out of hospitals from progressive complications from his initial injury, spending six months in Turkey, several months in the Israeli hospital, Hadassah, and around seven months at the Red Crescent Rehabilitation Center in Gaza.

Mohammad was pronounced dead at 2:30 a.m on December 6 after an unsuccessful surgery to treat an intestinal blockage, as confirmed by Dr. Osama al-Mulaiti, a pediatric surgeon at the European Hospital in southern Gaza.

Israel’s Operation Protective Edge lasted 50 days during the summer of 2014 and killed 2,220 Palestinians, of whom at least 1,492 were civilians, according to the United Nations Office for the Coordination of Humanitarian Affairs.

DCIP previously verified 547 Palestinian child fatalities during Israel’s offensive on the Gaza Strip, at least 68 percent of whom were under the age of twelve. Of this number, at least 164 children died as a result of Israeli drone strikes.

DCIP investigations into child fatalities found that in some cases, Palestinian children were targeted by Israeli drone strikes.

In one instance, an Israeli drone strike killed four children aged between 6 and 14 from the Joudeh family while they were in the family’s garden in Jabalia refugee camp, North Gaza, on August 24. The children’s mother, Rawya Joudeh, 40, was also killed in the same drone strike. Thaer Joudeh, who survived the attack, sustained a permanent disability.