Israeli Excavations in Silwan Cause Palestinian Lands to Collapse 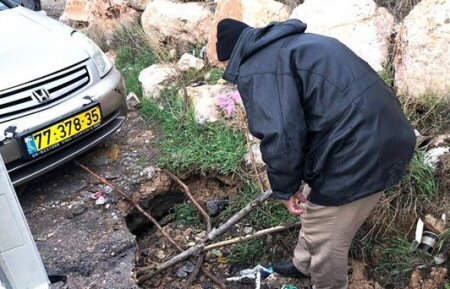 Palestinian lands located in the Silwan town of occupied East Jerusalem, in the central West Bank, have collapsed due to Israeli excavations and digging in the area, on Friday.

The Wadi Hilweh Information Center reported that collapses occurred in a land located behind the “Ein Silwan” mosque in Wadi Hilweh, due to the continuous Israeli excavations in the neighborhood.

The center told Ma’an News Agency that Israeli authorities have been carrying out continuous excavations in the neighborhood for years, which causes collapses and fractures in the foundations of houses and streets of the neighborhood.

In 2017, Palestinian residents of three houses, in Wadi Hilweh, that Israel had ordered the evacuation of, due to severe structural damage, refused to leave their homes and accused Israel of indirectly attempting to expel them from Jerusalem City.

Israel frequently allows excavations and archaeological digs that threaten the structural integrity of Palestinian homes and holy sites in the area.

Moreover, clashes erupted between Palestinians and Israeli forces in Silwan and al-Isawiyya.

Large numbers of Israeli soldiers were also reported to have raided al-Isawiyya, firing stun grenades and rubber-coated steel bullets in the area, while Palestinian youth threw rocks toward them.