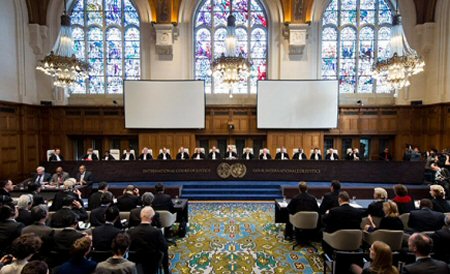 The International Court of Justice (ICJ) announced, this week, that it will consider a lawsuit filed by Palestinian officials, over the United States administration’s violation of international law, in moving its embassy to occupied Jerusalem.

A statement from the court, based in the Dutch city of The Hague, said it would first consider whether the case was within its jurisdiction and then consider admitting the case.

Al Ray reported that the statement, issued on Monday evening, said the court had asked both countries for written justification.

The Court was granted Palestine a maximum period of time, until 15 May, 2019, to submit its written justification, and to the United States, until 15 November, of the same year.

On December 6, 2017, US president Donald Trump announced his recognition of Jerusalem as the official capital of Israel, followed by the moving of the Washington embassy from Tel Aviv to occupied Jerusalem.

On September 29, Palestinian Foreign Minister Riyad al-Maliki announced that a lawsuit had been filed against the United States, before the International Court of Justice of the United Nations, for violating international law and moving its embassy to the occupied city of Jerusalem.