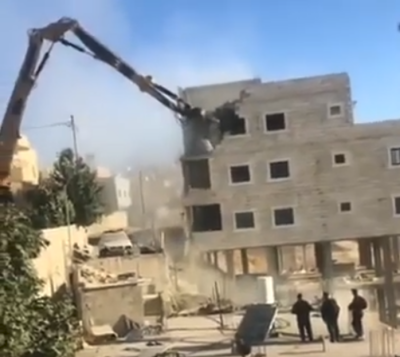 The Palestinian township of Ar’ara, located on the Israeli side of the Green Line (1967 Armistice Line), and an area targeted for Israeli colonial expansion, on Wednesday became the latest site of Israeli destruction of Palestinian homes.

Early Wednesday morning, Israeli forces invaded the village of Khor Saqr, located in the Ar’ara township in the northern part of Israel, in the ‘Triangle’ region near Umm al-Fahm.

The soldiers brought with them armored vehicles and Caterpillar-brand armored D9 bulldozers, which they used to destroy the family home of Ibrahim Marzouk.

Marzouk had been issued a demolition order by Israeli forces just days earlier.

According to local sources, the Israeli military forces invaded the area with Israeli police and special units, as well as numerous armored vehicles.

During the invasion of the village, they were confronted by local village youth, who threw stones at the soldiers and shouted at them to leave their town.

The Israeli soldiers abducted three youth and wounded several others during the confrontation.

Numerous Palestinian homeowners in the neighborhood of Khor Saqr have recently received demolition notices over the past year – totaling more than 50 homes and shops.

The demolition notices are part of an overall Israeli plan to displace Palestinians from their ancestral homes in Ar’ara and Ara townships, located in what is now Israel, and force the residents into the already-crowded West Bank – thus creating more internally displaced refugees in an area that already houses one of the largest refugee populations on earth.

In 2017, columnist Ali Abunimah wrote about Netanyahu’s ‘Prawer Plan’, which would force the transfer of Palestinians with Israeli citizenship into the West Bank.  The Palestinian residents of the Ar’ara township are among those targeted by the Israeli government for forced relocation.

“Netanyahu’s plan would take Palestinians in Israel, who currently possess rights as citizens – albeit limited by law and inferior to Jews – and move them to a situation where like the rest of the Palestinians under perpetual Israeli military occupation they would have no rights at all”, wrote Abunimah.