Gaza Revived: How An Irishman Is Giving Hope To Palestinian Amputees 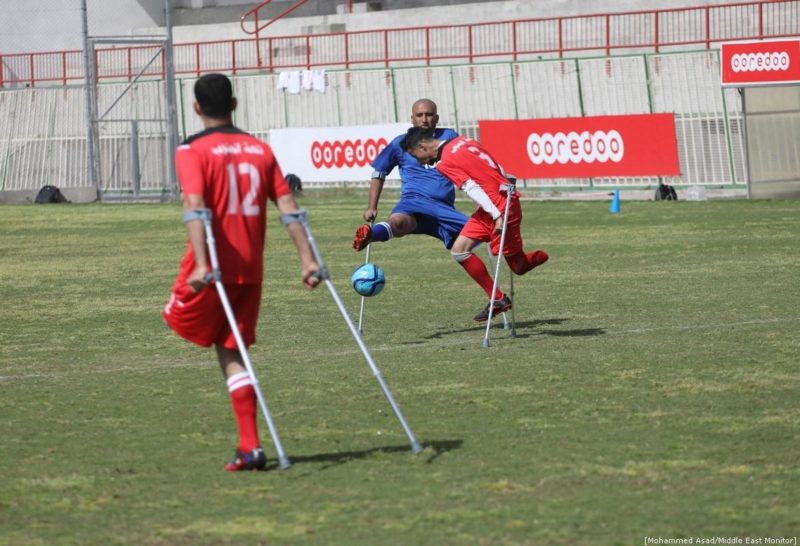 Gaza. The very name evokes images of Israeli bombardment, crumbling infrastructure, keffiyeh-clad protestors standing defiantly with Palestinian flags and slingshots, and screaming children shot by snipers in a fog of tear gas and smoke from burning tyres. All of these images are the unfortunate reality of the Palestinians in the Gaza Strip, but there remains an untapped sporting potential within the population, and one man has dared to dig it out from among the most unlikely of people: the growing number of amputees.

Over the past few years, the number of amputees in the Gaza Strip has risen exponentially, particularly since the beginning of the Great March of Return protests at the nominal border between Gaza and Israel since 30 March last year. The brutality of the Israeli response to the peaceful protesters includes the use of live ammunition and tear gas, killing almost 300 Palestinian men, women and children, and wounding more than 25,000 others. In May this year, the UN stated that in the current crisis with its serious healthcare shortages, around 1,700 Palestinians face the possibility of having lower limbs amputated. All is not lost, though.

Speaking exclusively to Middle East Monitor from his office in Dublin where he works full-time as an accounts manager for a housing company, Simon Baker stressed his status as a football coach rather than someone who is trying to change the politics in occupied Palestine.

His mission in Gaza began with losing his own leg after an accident at a building site in 2004. The incident left him depressed and traumatised. He overcame this by getting back into sports, football in particular, where he discovered that being an amputee was no real barrier to his value as an active member of society. Since then, he has dedicated his free time and energy to teaching and helping other amputees to realise their potential as the head of the European Amputee Football Federation (EAFF) since 2015.

When he first began training Gaza’s amputee football team, his intention was clear. “I don’t understand the situation, I only knew what I saw on the news, but I wasn’t there to be a politician.” He outlined to the players the many benefits that sporting activities can bring when separated from politics, namely that “you turn your life around” and that you “can become a valuable member of society… you’re representing your community. But the long-term goal is that you’re actually going to represent your country.”

When Baker arrived in Gaza in April this year with a delegation from the International Committee of the Red Cross (ICRC), the amputee football team had already been together since the start of the Great March protests, but did not have the resources and opportunity to develop to any meaningful extent. “It was really just a few lads having a kick around with a ball,” Baker recalled, “and it was more them just chasing the ball. It looked good, though, and they were impressive, and it was great that they had taken this initiative.”

What the players really lacked was a solid structure which could help them move from being a local to an international team. “There’s a lot of work before they start playing football: we’re working on the structure, delivery, dominance; everyone has a role to play. It has to become sustainable.”

This sustainability, Baker pointed out, is the primary end goal of his time in Gaza. “When I go to a country, the first thing to do make sure that there’s good governance and that they’re registered. It’s not a case of get off a plane, here’s some crutches, take some photos, goodbye, because six months later it’s all collapsed.”

With the objectives and structures set up for the team back in Gaza and maintained during his absence, Baker plans to return to the coastal territory in September to continue his mission; he has ambitious plans for the team. He wants to create “a festival of sports in Gaza”, a two-day programme of events for other disabled sportsmen and women, including blind karate and wheelchair basketball, in one of the Strip’s stadiums, bringing people together to celebrate sporting achievements with plenty of food and music. “The head of the ICRC delegation said that this sounds really good, because it’s a long time since the people of Gaza had something to celebrate.” Baker also aims to lead a marathon along the coast of the territory.

Moreover, the Irishman does not simply aim to coach the team to play in Gaza; his sights are set far beyond the Strip towards an international horizon. His long-term goal is to establish a junior amputee football team, drawing players from the growing legion of child amputees, which would make the project both regulated and recognised as one with the capability to play internationally. “We created it in Europe and the reason we did so is because that’s the future of the sport… You create a proper league so there’s regular football, and from the league we hope in six months to have a proper international team, because you get the best of the best.”

For this, the project requires more media recognition, funding and help from both local and international actors. One possible stakeholder that Baker intends to bring on board is the Palestinian Football Association (PFA), the governing body for the sport in Palestine, which has yet to recognise amputee football. “The PFA has a responsibility to participate in something like this,” he insisted. “We’re not asking it for money, we’re just there to create the foundations – the governance, the structure, the right public image – and we register with a sporting organisation. But then we grow the teams.”

The PFA, if it decides to back the team, could arrange for it to have the use of football pitches free of charge, facilitate training and governance, and provide other support which would boost Gaza’s amputee football team towards an international level.

Although Baker admitted that he had seen the obvious effects of the suffocating siege imposed on the Gaza Strip since 2007 by Israel and its allies, he confessed that he did not experience any serious personal shortages during his stay. He did, however, say that he forgot to bring sunscreen lotion with him and, on the first day of training, the heat got to him. After the training session, he asked the security guard assigned to him to stop somewhere to buy some lotion; he was told that only absolute necessities are generally available in Gaza, due to the siege.

The Israeli authorities did not allow him to bring any kit and crutches with him into Gaza because “they could be used as weapons”. Baker’s sunburnt face brought it home to him that the Palestinians in Gaza are affected even more seriously by the daily shortages of basic items. “I know all these things,” he said in dismay, “but I can’t change it.”

While some might criticise Baker and other outsiders for not openly condemning the Israeli blockade on Gaza and the atrocities committed against participants in the Great March protests, the reality is that to pick a side is to jeopardise the ability to help the team and other needy Palestinians. Visas to enter Gaza are a fact of life and can be withheld by the occupation authorities, as could visas for players and the team to go abroad for international matches. This is constantly on Baker’s mind.

While the Strip is blockaded and its people languish in suffocating circumstances, the Palestinians in Gaza have made a lasting impression on the football coach. Baker not only underwent his own personal trauma, but has also travelled to various countries to train those in poverty, and has gained an insight into the challenges facing amputees in less developed parts of the world. He has also discovered a trait in the Palestinians which he did not find in such abundance anywhere else: resilience.

“One thing I did notice is that not one person came and said, ‘We have it so bad, I hate Israel, I don’t want this.’ They just said, ‘No more training, let’s play football.’ I was really amazed by it.” Unlike other countries in which he has trained amputees, he was shocked by the restraint and pride which with the Palestinians hold themselves. “I have never seen such resilient people… not one player said, ‘Give me something, give me money.’ They were very proud people.”

Simon Baker’s overall message is to separate sport from politics. “Sport is about fair play,” he explained. “If only for one hour a week the players can forget the problems in Gaza and only focus on the football, then I’m doing my job.” This, he said, is how anyone who is not a politician can truly help people, as the sport will help to develop them back into being core members of society; the politics can follow. “I’m not a politician; the only thing I can say is what I think sport will do, and that is that it can make a person feel a sense of worth, a sense of being; feel like a valued member of the community.”

He admitted that he doesn’t know how the situation in the Gaza Strip will end. “You know, I just hope that there’s no more damage and no more amputees… One thing I can say, though, is that in the future, if I can, I will take my wife to Palestine, for sure. It’s a beautiful country. And the beaches!”

This Irish football coach, himself an amputee, is giving hope to Palestinians in the same situation. In that sense alone, Gaza has been revived.

Muhammad Hussein is currently reading politics at a university in London. He has a keen interest in the Middle Eastern and international political affairs.