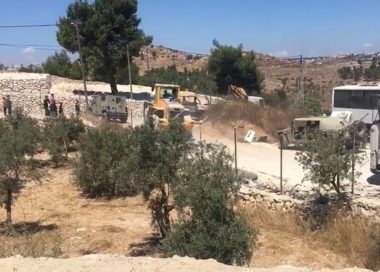 The Israeli forces, on Wednesday, demolished a Palestinian-owned agricultural storehouse in Husan village, west of Bethlehem in the central West Bank, the Palestinian Information Center reported.

Local sources stated that an Israeli bulldozer accompanied by soldiers stormed the village and destroyed a storehouse used for agricultural purposes, under the commonly used pretext of ‘unlicensed construction’.

Mohammad Sabatin, the head of the village council stated that Israeli forces uprooted scores of olive trees from an olive grove located to the west of the village, belonging to Adel Shusha.

Sabatin added that the army leveled the three-dunam olive grove, tore down a shack as well as retaining walls, purportedly for being located ‘under Israeli sovereignty’.