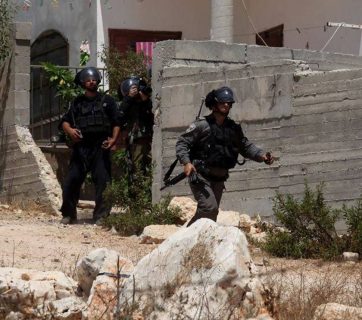 Local sources reported that at least four Palestinians were wounded by live rounds, with medical sources describing their injuries as light, while many others suffered the toxic effects of tear gas inhalation.

Coordinator for the Popular Resistance activities in Kufur Qaddoum, Morad Eshteiwi, was quoted as saying that Israeli troops invaded the Kufur Qaddoum village from various directions and embarked on shooting indiscriminately at protesters.

Eshteiwi added that many other protesters were exposed to toxic tear gas, fired by Israeli troops. Some of the army fire hit rooftops of many local households in Kufur Qaddoum, with no causalities reported.

Israeli army fire came in response to a weekly local protest by the residents of Kufur Qaddoum, in which they protest illegal settlements, the Apartheid Wall, erected around their village, in addition to demanding the opening of the main road leading east to Nablus.

International law and relevant United Nations resolutions confirm that all Israeli settlements are illegal, and that they undermine chances of a two-state solution between Israel and Palestine.