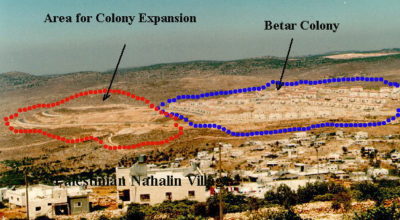 On Thursday, Israeli forces stopped the construction of a home in Nahalin town, west of Bethlehem, and seized equipment including a concrete pump and mixer.

The troops were accompanied by members of the ‘Israeli Civil Administration’, which serves as the unelected government that inflicts martial law upon the Palestinian living under Israel’s military occupation in the West Bank, Gaza Strip and Golan Heights.

Israeli authorities in this case, as in thousands of other cases, claimed that the home was being “constructed without a permit”. But Israeli authorities have not issued permits for any Palestinian home construction since they began their military occupation of the West Bank, Gaza Strip and Golan Heights in 1967.

The Deputy head of the Nahalin Municipal Office, Hani Fonoun, told reporters from the Palestinian news agency Wafa that the notice was issued to stop construction on the 120 square-meter house, located east of the town.

He added that the soldiers also seized a concrete pump and a mixer from the construction site.

The area in question is an area that Israeli authorities hope to annex as part of the ‘Jerusalem E1’ Plan, which involves the takeover of hundreds of acres of Palestinian land in order to create a ‘circle of settlements’ around Jerusalem, to attempt to take over the city of Jerusalem in violation of international law and signed agreements.