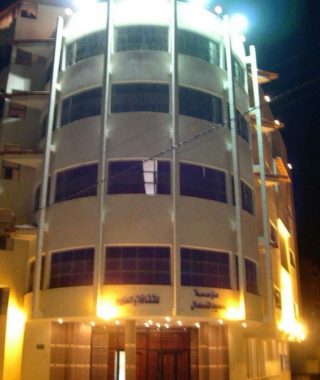 The building is located in a densely populated area, west of Gaza City. As a result, the building was completely destroyed and 20 civilians, from the area residents, were wounded.

The Palestinian Center for Human Rights (PCHR) considers the targeting of this civilians building to be Israeli delinquency of using destructive force against Palestinian civilians and their civilian and cultural institutions, which constitutes a grave violation of the rules of international law.

PCHR is concerned that the Israeli forces may continue to escalate their aggression and target civilian objects, pretending an increase in the number of casualties and destruction to property.

According to PCHR’s investigations, at approximately 17:45 on Thursday, 09 August 2018, Israeli drones in about 30 minutes fired 6 missiles few minutes between each at the Sa’ed al-Mishal Cultural Centre located on ‘Aydiyia Street in Southern al-Rimal neighborhood,west of Gaza City.

The 400-sqaure-meter building was comprised of 5 floors, which includes the Egyptian community’s office, cultural center and theater for arts and Dabkeh.

The Sa’ed al-Mishal Cultural Centre is one of the most important cultural and artistic centers in the Gaza Strip. Most of the nearby houses residents received phone calls from the Israeli forces, informing them to evacuate the area as a prelude to destroy it.

At approximately 18:30, the Israeli warplanes launched 3 missiles at the building. As a result, the building was totally destroyed and turned into rubble, and the neighborhood buildings sustained sever damage.

Due to the scattered rubble, 20 civilians were wounded and taken to al-Shifa Hospital. Doctors classified their injuries as minor. Among the wounded civilians was Yusuf Ziyad Mohammed Lubbad (29), a photojournalist at al-Aqsa TV Channel. 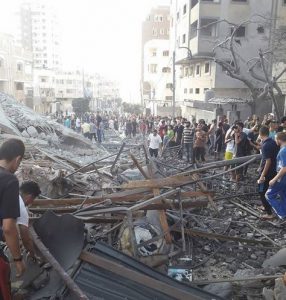 PCHR condemns this attack and stresses that it’s a serious violation of the United Nations Educational, Scientific and Cultural Organization (UNESCO) Declaration concerning the intentional destruction of cultural heritage in 2003, and a violation  of the international humanitarian law, particularly the articles dealing with the protection of cultural property in  times of war and under occupation, which is mentioned in the Fourth Geneva Convention1949, the Hague Convention of 1954 relevant to the protection of cultural property in the event of armed conflict, in addition to principles mentioned in the “UNESCO” Conventions and the Recommendations Concerning the Protection of Cultural Heritage.

PCHR also refers to the Hague Convention respecting the Laws and Customs of War on Land on 18 October 1907, established the principle of immunity for cultural objects, even in case of siege or bombardment:

PCHR holds Israel fully responsible for the safety of Palestinian civilians under all circumstances. In addition, International Law stipulates differentiating between civilian and military targets.