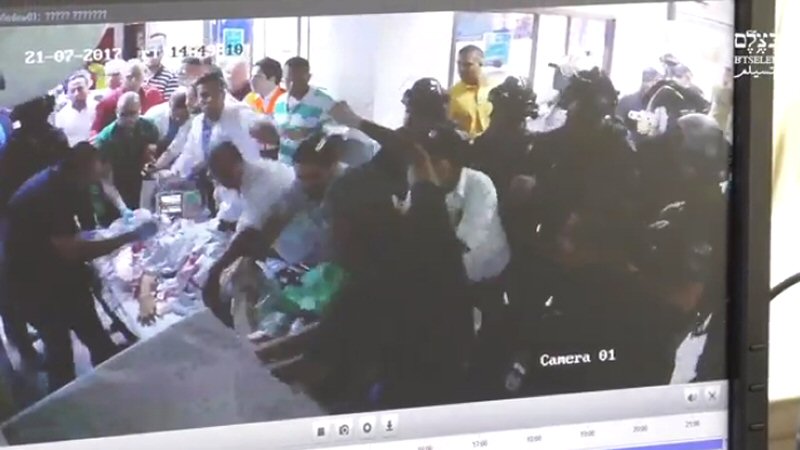 At one point, Israeli occupation forces tried to seize a critically wounded man who was being taken to surgery.

The video shows medics and civilians attempting to protect the man, Muhammad Abu Ghanam, from being seized. But the 20-year-old died about 20 minutes after the commotion.

The video was published on Sunday by the human rights group B’Tselem, along with a harrowing report on the 21 July Israeli raid.

The assault was part of Israel’s violent reaction to the campaign of civil disobedience and protests by Jerusalemites last month against Israeli moves to tighten control over the al-Aqsa Mosque compound.

Abu Ghanam was one of the six Palestinians killed by Israeli forces during protests related to al-Aqsa.

“Words fail to convey the gravity of the police’s conduct inside the hospital,” B’Tselem said, according to Days of Palestine.

“The fright engendered by scores of armed police raiding a hospital cannot be downplayed. When these feelings of terror are accompanied by an assault on medical staff and interference with medical care, the situation escalates to one of a real risk to the lives of the many patients in the hospital.”

B’Tselem’s report includes testimonies from medical staff describing dozens of heavily armed Israeli personnel raiding the hospital. They forced their way in, attacking security guards and civilians, who tried to defend the facility, with stun grenades and sponge-tipped bullets.

The Israelis kicked people out of the blood bank, where dozens of volunteers were trying to donate desperately needed blood. They raided the maternity ward, including a room where a mother was present, and sprayed pepper spray into another that was empty. Staff gathered most of the mothers in one room and took their babies to the nursery to protect them.

Abu Ghanam had been involved in confrontations between Jerusalem youths and occupation forces in the al-Tur neighborhood when he was shot in the chest.

Israeli forces stood around him for five to 10 minutes without providing any medical assistance, according to B’Tselem. Then, when a Red Crescent ambulance arrived, Israeli forces tried to obstruct it. But, the paramedics were able to reach Abu Ghanam and get him into the ambulance – which one of the Israeli soldiers tried to get into as well.

“There was some mutual shoving between one of my colleagues and the two officers for about a minute, and then we got into the ambulance,” one of the medics told B’Tselem. “I locked the ambulance with the central locking system.”

The medics then managed to drive to the hospital, despite Israeli forces trying to block their way.

But, for all the efforts of the medical staff, they could not save Abu Ghanam’s life. After he died, Palestinians managed to smuggle him out of the hospitall and take him for immediate burial, to avoid Israeli forces confiscating his body – a frequent form of collective punishment.

A report last month by Amnesty International called the Israeli assault on the hospital a “ruthless display of force.”

“The conduct of Israeli forces who carried out violent raids on Al-Makassed hospital harassing and intimidating staff and patients is utterly deplorable,” Amnesty’s deputy director for the Middle East and North Africa, said. “There can be no justification for preventing medical workers from caring for a critically wounded patient.”

Israeli forces habitually raid hospitals, even carrying out extrajudicial executions inside them.

The 21 July assault on Al-Makassed hospital, B’Tselem said, “is part of a much larger picture, one in which Israeli authorities repeatedly show the hundreds of thousands of Palestinian residents of Jerusalem just how unwanted they are in their own city and how cheap their lives are.”