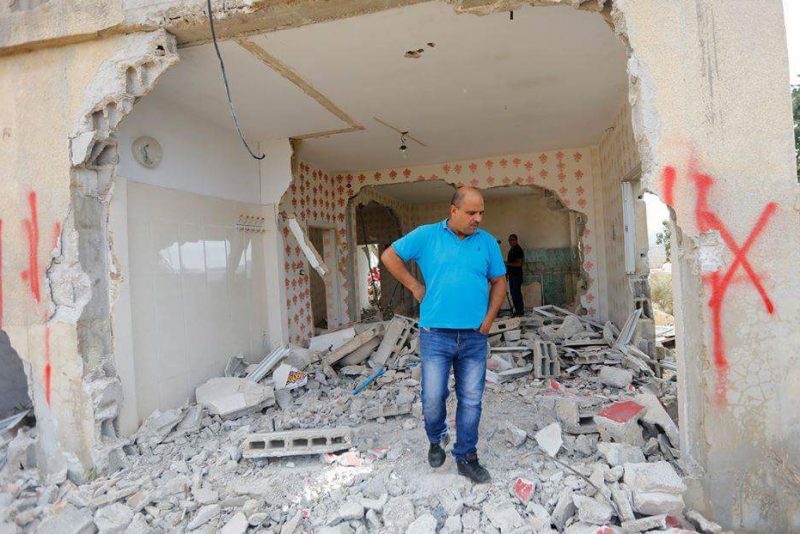 Israeli forces continued with systematic crimes in the occupied Palestinian territory (oPt) for the week of 10 – 16 August, 2017.

In the West Bank, during the reporting period, Israeli forces wounded 10 Palestinian civilians, including 2 children.  Eight of them, including a child, were wounded with metal bullets when Israeli forces moved into Abu Shkheidem village, northwest of Ramallah.  A child was also wounded with a live bullet during Kafr Qaddoum weekly protest, northeast of Qalqiliya, while another one was wounded with a live bullet in Beit Safafa village, south of occupied Jerusalem.

Concerning attacks on fishermen, on 11 August 2017, Israeli gunboats sporadically opened fire at and chased the Palestinian fishing boats, northwest of Beit Lahia village, north of the Gaza Strip. An Israeli gunboat surrounded a fishing boat manned by ‘Oday al-Sultan (26) and his brother Saddam (24) from al-Salatin neighborhood in Beit Lahia.  The Israeli navy soldiers then arrested both fishermen and took them to Ashdod Seaport after confiscating their boat.  The two fishermen were questioned and later released while their boat is still under custody.

During the reporting period, Israeli forces conducted at least 46 military incursions into Palestinian communities in the West Bank, and 10 ones in Jerusalem. During these incursions, Israeli forces arrested at least 56 Palestinian civilians, including 11 children and 2 women. Twenty five of them, including 7 children and a woman, were arrested in occupied Jerusalem and its suburbs.

As part of the Israeli forces’ collective punishment policy against the families of Palestinian civilians who are accused of carrying out attacks against Israeli soldiers or/and settlers.  On 10 August 2017, Israeli forces demolished 2 houses and closed a third one with compact cork in Deir Abu Mesh’al village, northwest of Ramallah, while they demolished another house in Silwad, northeast of the city, rendering the residents homeless.  It should be mentioned that on 16 June 2017, the Israeli forces killed sons of the three families from Deir Abu Mesh’al when the former opened fire at the 3 Palestinians after carrying out a stab and shooting attack on al-Sultan Street and at the northern entrance to al-‘Amoud Gate in East Jerusalem.  They also arrested Malek Hamed from Silwan village after accusing him of running over 2 soldiers on 06 April 2017 in the vicinity of ‘Ofra settlement established on the abovementioned village lands.

On 16 August 2017, Israeli forces demolished a house belonging to ‘Omer ‘Abdel Jalil Al-‘Abed in Kobar village, northwest of Ramallah, who has been arrested since 21 July 2017 on grounds of carrying out a stab attack in “Helmish” Settlement, northwest of the city.

In the context of house demolitions and notices, on 14 August 2017, Israeli forces demolished 3 houses and a sheep barn built of tin plates in Khashm al-Daraj village, southeast of Yata, south of Hebron.  Those houses built of tin plates sheltered 3 families of 12 members, including 4 children and 7 women.  It should be mentioned that those facilities were donated by GVC after the abovementioned families’ houses had been demolished.

On 16 august 2017, Israeli forces demolished two coal manufacturing facilities, and more than 20 tons of coal, which were still in the manufacturing process, and 30 tons of wood and coal were seized in Ya’abod village, southwest of Jenin.

(PCHR keeps the names of the wounded civilians)

According to PCHR’s investigations, today at dawn, the Israeli forces backed by about 50 military vehicles and a number of bulldozers moved into Deir Abu Mesh’al village, northwest of Ramallah, while a drone was soaring. The Israeli forces cordoned off the village and surrounded 3 houses. The military vehicles demolished two houses and closed a third with compact cork as the latter was hard to demolish because it is attached to other houses. The demolitions were as follows:

It should be noted that the Israeli forces killed the sons of the three families on 16 June 2017, after they carried out stab and shooting attacks on al-Sultan Suleiman Street, at the northern entrance to Bab al-Amoud (Damascus Gate) in East Jerusalem. The killed young men were identified as:

Confiscating a bus belonging to al-Tamimi Company at Za’tarah Checkpoint, South of Nablus

“I am a driver at al-Tamimi Transportation Company. At approximately 14:30 on Sunday, 13 August 2017, I was in Nablus and then headed to al-Sawiyia village, where there was a wedding, in order to drive passengers back from the wedding to Sinjel village, north of Ramallah. When I arrived at the Za’tarah checkpoint and the bus was completely empty, two Israeli soldiers stopped me and then asked me to turn the bus off and step out of it. I obeyed their orders, during which, an Israeli soldier got into the bus and fully searched it. He then asked me to give him my ID card and to close the bus’ doors. An hour later, I told them that I want to go to a wedding. Only minutes later, a Toyota car with an Israeli registration plate arrived in the area travelled by two Israeli Civil Administration officers. One of the officers asked me if the bus belongs to al-Tamimi Company, and I said yes. The officer then told me that the bus is now under custody. I asked him why? He replied: because the bus is used to drive rioters to the Israeli checkpoints. Meanwhile, the Israeli officer ordered me to get into the bus and drive the bus to the Israeli Military Liaison in Hewarah, where the bus was detained and I was released.”

In al-‘Issawiyia village, northeast of the city, Israeli vehicles demolished a 2-storey building built on an area of 110 square meters. The building belongs to two brothers Ahmed and Abdullah Hamdan. Mohamed Abu al-Humus, Member of Follow-up Committee in the village, stated that at dawn, over 400 Israeli soldiers moved into the village and forced the building’s residents and shops’ tenants in the ground floor to vacate their property. He added that the Israeli forces used heavy vehicles while demolishing the building, which includes a residential apartment and 2 shops. Abu al-Humus said that the abovementioned building was built 10 years ago in an area where construction is allowed and is surrounded by other buildings in the area; some of which were built from 80 years. Abu al-Humus pointed out that the Israeli Municipality refuses to issue structural maps of the village that enable residents to obtain construction licenses.

It should be noted that the abovementioned facilities were demolished by the Israeli authorities under the pretext of being located out of the village structural plan, which was announced in 2008. Furthermore, in 2000, the village residents prepared a cadastral plan of their lands to prove owning them. In 2007, the Israeli authorities accepted to grant the residents land of (2000 dunums) within the abovementioned plan, but the residents rejected this offer in order to obtain more lands than the offered ones. In 2008, the lawyer Qamar Mashreqi obtained the approval on this plan with an area of (2500 dunums).