Israeli High Court Rules to Allow, Expand Use of Torture 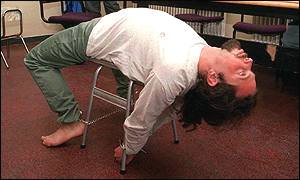 In a ruling that directly violates international law and conventions against the use of torture, the Israeli High Court ruled Monday that Israeli intelligence officers were justified in their use of torture against a Palestinian prisoner. The ruling sets a precedent for the future use of torture and the expansion of such techniques used against Palestinians held in Israeli custody.

The case, which involved Palestinian prisoner Fares Tbeish, was brought to the Israeli High Court after lower courts ruled that the torture was justified.

In 2012, the case alleges, Israeli officials from the Shin Bet intelligence agency forced Tbeish into stress positions, inculding arching and tying the body in the “banana” position. They also subjected him to severe physical and mental violence, including beatings.

The ruling was made by a three-justice panel of Yitzhak Amit, David Mintz and Yosef Elron. The three judges ruled that no policy changes needed to be made, and that the current policy and practice regarding torture is sufficient.

According to the Israeli human rights group B‚ÄôTselem, ‚ÄúIn interrogating Palestinian residents of the Occupied Territories, the Israel Security Agency (ISA, also known by the Hebrew acronyms Shin Bet or Shabak) routinely used methods that constituted ill-treatment and even torture until the late 1990s‚ÄĚ.

The group states, ‚ÄúIn September 1999, following a series of petitions filed by human rights organizations and by Palestinians interrogated by the ISA, Israel‚Äôs High Court of Justice (HCJ) ruled that Israeli law does not empower ISA interrogators to use physical means in interrogation. The justices ruled that the specific methods discussed in the petitions ‚Äď including painful binding, shaking, placing a sack on a person‚Äôs head for prolonged periods of time and sleep deprivation ‚Äď were unlawful.

‚ÄúHowever, they also held that ISA agents who exceed their authority and use ‚Äėphysical pressure‚Äô may not necessarily bear criminal responsibility for their actions, if they are later found to have used these methods in a ‚Äúticking bomb‚ÄĚ case, based on the ‚Äėnecessity defense‚Äô. Following this ruling, reports of torture and ill-treatment in ISA interrogations did drop. However, ISA agents continued to use interrogation methods that constitute abuse and even torture, relying on the court‚Äôs recognition of the ‚Äúticking bomb‚ÄĚ exception. These methods were not limited to exceptional cases and quickly became standard interrogation policy.‚ÄĚ

In December 2017, according to the Israeli newspaper The Jerusalem Post, a court ruling made it easier for the intelligence agencies to justify torture ‚Äď but such techniques still violate international law.

According to Al Jazeera, ‚Äúmore than 1,000 complaints from Palestinians have been submitted to a government watchdog body over the past 18 years, but this is the first time one has led to a criminal investigation.

‚ÄúMany Palestinians are jailed based on confessions either they or other Palestinians make during Shin Bet questioning. Israeli military courts almost never examine how such confessions were obtained or whether they are reliable, say lawyers, contributing to a 99.7 percent conviction rate.

‚ÄúLast month, in freeing a Palestinian man who was jailed based on a false confession, an Israeli court accused the Shin Bet of using techniques that were ‚Äúliable to induce innocent people to admit to acts that they did not commit‚Äô‚ÄĚ.

According to the Electronic Intifada, ‚ÄúThe impunity extends to circumstances where there is strong evidence that torture led to the death of a detainee, such as Arafat Jaradat, a 33-year-old father of two who died after an Israeli interrogation in Megiddo prison in 2013.‚ÄĚ

Israeli legal scholar Itamar Mann told the Middle East Monitor that this ruling is ‚Äúprobably the most permissive as of yet in terms of accepting physical abuse as a legitimate method of interrogation in national security cases‚ÄĚ.

According to Mann, the court‚Äôs judgement means that ‚Äúanyone who is (1) part of a designated terrorist organization (such as Hamas); and (2) is involved in armed activity, may be subject to ‚Äėspecial methods‚Äô [i.e. torture] if (3) no other way to obtain crucial information is available‚ÄĚ.