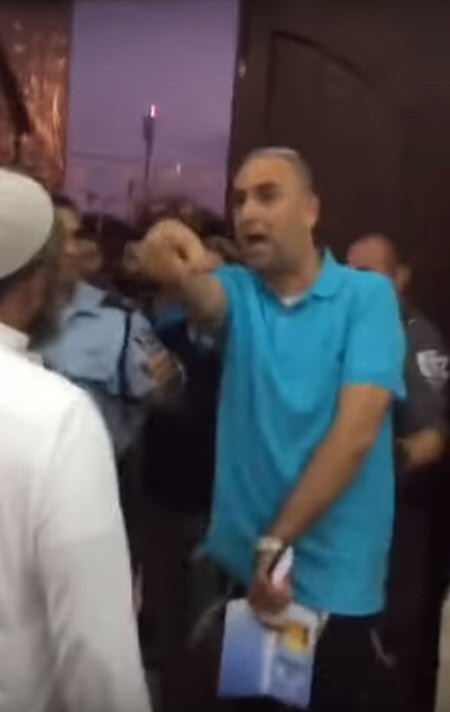 Israeli police forces, on Friday, raided a mosque in the central Israeli city of Lod (or Lydda) and attempted to stop Eid al-Adha prayers and the call to prayer that were being transmitted through the mosque’s speakers, citing noise violations.

Yaffa 48 news website reported, according to Ma’an, that Israeli police escorted the Israeli mayor of the city, Yair Revivo, into the mosque, who physically attempted to prevent worshipers from partaking in the holiday prayers.

Revivo claimed that he was “hit in his arm” by worshipers while trying to prevent them from praying.

Worshipers said that the mayor’s actions were “provocative and racist,” adding that he “searches for ridiculous excuses to prevent prayers.”

One worshiper who was at the mosque said that Israeli police forces assaulted and pushed worshipers during the raid, according to Yaffa 48.

The witness added that Revivo assaulted one of the worshipers who was filming the incident.

Despite the raid, worshipers continued to file into the mosque and performed the prayers.

An Israeli police spokesperson was not immediately available for comment.

Last year, an Israeli ministerial committee approved draft legislation which could ban the use of loudspeakers to broadcast the Muslim call to prayer, which is broadcast five times a day from mosques or Islamic centers, in Israel.

The bill, which calls for barring the use of loudspeakers for any religious or “inciting” messages as part of the call to prayer, would need to go through several readings in the Knesset — Israel’s parliament — before making it into law.

Israeli Prime Minister Benjamin Netanyahu has come out in support of the bill, saying “I cannot count the times, they are simply too numerous, that citizens have turned to me from all parts of Israeli society, from all religions, with complaints about the noise and suffering caused them by the excessive noise coming to them from the public address systems of houses of prayer.”

A number of Palestinians with Israeli citizenship slammed the bill on Sunday as yet another instance of discrimination against non-Jewish citizens of Israel.

Palestinian communities in Israel and occupied East Jerusalem have long been targeted by discriminatory Israeli policies, whether through “divide and conquer” tactics, attempts at forcibly displacing Bedouin communities, and what has been denounced as a policy of “Judaization” of Jerusalem at the expense of other religious communities.