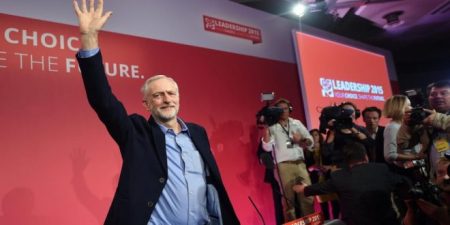 As recently as June, the election manifesto called for an end to Israel’s blockade, illegal occupation and settlements. These have been dropped from the policy proposal, as has the pledge that “A Labour government will immediately recognise the state of Palestine.”

According to the PNN, all that remains in the NPF’s report to conference is the statement that, “In Israel and the Occupied Palestinian Territories, Labour is committed to a comprehensive peace based on a two-state solution: a secure Israel alongside a secure and viable state of Palestine.”

“The NPF seems to be asking Labour to abandon its support for Palestinian rights,” said Jenny Manson, chair of Jewish Voice for Labour (JVL), a new organisation established in July for Jewish members of the Labour Party.

JVL is calling for the relevant section of the National Policy Forum report to be remitted, i.e. not put to a vote at Conference.

In a statement the group asks: “What has happened since Jeremy Corbyn presented the overwhelmingly popular 2017 Manifesto to the electorate, for the party to abandon its commitment to immediate recognition of Palestinian aspirations?”

The statement notes a media report indicating that the policy shift has the support of pro-Israel lobbyists within the party.

Manson said, “Most party members, including many Jewish ones, will be alarmed at this apparent surrender of the party’s principles.

They have not been consulted about it and we believe they will support our call for this section of the NPF report to be remitted.”

JVL (Jewish Voice for Labour) notes with concern that the National Policy Forum report (p. 56), to be presented to Brighton conference, departs significantly from the Party’s Manifesto commitments (p.117-18) to a just and lasting peace between Israelis and Palestinians.

NPF Chair Ann Cryer says, in her introduction to the report, that it is the result of “consultation with Party members, and a series of manifesto priorities meetings with NPF representatives and stakeholders.”

But, there is no sign on the NPF website of a groundswell of opinion requiring the party to ditch the commitment to recognising the state of Palestine and an end to illegal settlement building and occupation.

It is noted, however, that an article in the pro-Israel Jewish Chronicle applauds the report for avoiding “any direct criticism of Israel” and quotes a “senior Jewish Labour source” saying the wording was “better than the election manifesto and a bit of a success.”

The source is presumably aligned with the Jewish Labour Movement, which has acquired considerable influence in the Party while deploying allegations of antisemitism against those who persist in upholding their legitimate right to express “direct criticism of Israel.”

As members and supporters of JVL, a newly-formed organisation representing Jewish Labour Party members, we fully recognise Israel’s responsibility for the oppression of Palestinians and urge the NEC to seek remittance of this section of the NPF report and to ensure genuine consultation with members representing a wider range of opinion on this crucial international policy issue.

The 2017 Labour Party election manifesto contained the following statement: “Labour is committed to a comprehensive peace in the Middle East based on a two-state solution – a secure Israel alongside a secure and viable state of Palestine.

“There can be no military solution to this conflict and all sides must avoid taking action that would make peace harder to achieve. That means both an end to the blockade, occupation and settlements, and an end to rocket and terror attacks. Labour will continue to press for an immediate return to meaningful negotiations leading to a diplomatic resolution. A Labour government will immediately recognise the state of Palestine.

“The National Policy Forum Report to the forthcoming Annual Conference says this (only) on Israel/Palestine:
In Israel and the Occupied Palestinian Territories, Labour is committed to a comprehensive peace based on a two-state solution: a secure Israel alongside a secure and viable state of Palestine.”