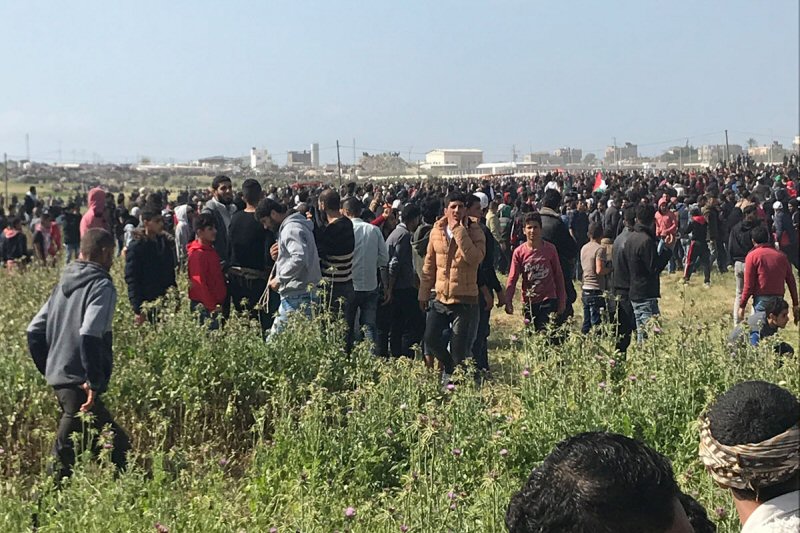 The Israeli military has admitted that its bloody crackdown on unarmed Palestinian protesters was “accurate and measured.” The Israel Defense Forces, which shot 773 Gazans with live ammunition, likewise said, “we know where every bullet landed.”

Israel’s military made this admission in posts on Twitter, before promptly deleting the tweets. The Real News has archived and documented these tweets.

On Friday, March 30, tens of thousands of Gazans living under a suffocating and illegal decade-long Israeli blockade held a massive peaceful march on the Gaza border, demanding the right Palestinian refugees have under international law to return to the homeland from which Israel expelled them.

The Israel Defense Forces (IDF) met the march with a barrage of bullets, mowing down unarmed protesters in a massacre that immediately prompted international outrage.

More than 1,400 Palestinians were injured in the IDF’s attack, according to Palestinian medical officials. Israeli soldiers shot 773 Gazan protesters with live ammunition, killing at least 16 people.

The day after the protest, on March 31, the IDF published a series of posts on its official Twitter account. The Israeli military referred to the unarmed protest as a “riot” and an “organized terrorist operation.”

“Yesterday we saw 30,000 people; we arrived prepared and with precise reinforcements,” the IDF tweeted. “Nothing was carried out uncontrolled; everything was accurate and measured, and we know where every bullet landed.”

Soon after writing this, the IDF deleted its six-tweet thread.

The Real News documented the full deleted Twitter thread by archiving the cached version of the official IDF account.

The Israel military’s admission that the massacre was intentional and pre-planned is also reflected in its actions immediately before the protest.

Israel’s top general said in an interview published on March 28 — two days before the peaceful protest, dubbed the Great Return March, was due to take place — that the IDF had already deployed more than 100 sharpshooters on the Gaza border. The Israeli military was clearly preparing for violence.

B’Tselem, the Israeli Information Center for Human Rights in the Occupied Territories, published a screenshot of one of the IDF’s deleted tweets. The leading human rights organization’s international advocacy officer Sarit Michaeli noted, “Israeli army takes full responsibility for the killing of all unarmed protesters and the injuring of hundreds with live ammunition.”

The progressive U.S. Jewish group IfNotNow, which campaigns against Israel’s illegal five-decade-long military occupation of the Palestinian territories, commented on Twitter: “This is how the Israeli army brags about shooting 773 Palestinians with live fire. Thanks to @btselem for capturing this deleted tweet, revealing the pride the IDF feels about the casualties they inflicted on unarmed protesters yesterday.”

The text of the six deleted IDF tweets follows in full below:

“Yesterday’s riot was an organized terrorist operation behind which stand Hamas, its leaders, its military wing, terrorist organizations such as the PIJ and others

What we saw yesterday were attempts to launch rockets, attempts to carry out live attacks, Molotov cocktails, attempts to set fire to the security fence, and a lot of terrorist activity — not a quiet protest in the center of Gaza

Yesterday we saw 30,000 people; we arrived prepared and with precise reinforcements. Nothing was carried out uncontrolled; everything was accurate and measured, and we know where every bullet landed

The citizens of Gaza are not the enemy, certainly not the women and children. We have no intention of harming the residents of Gaza who want to live their lives despite their misfortune under the failed rule of Hamas

We are only interested in terrorists who are trying to disrupt Israeli life; we only act against them”