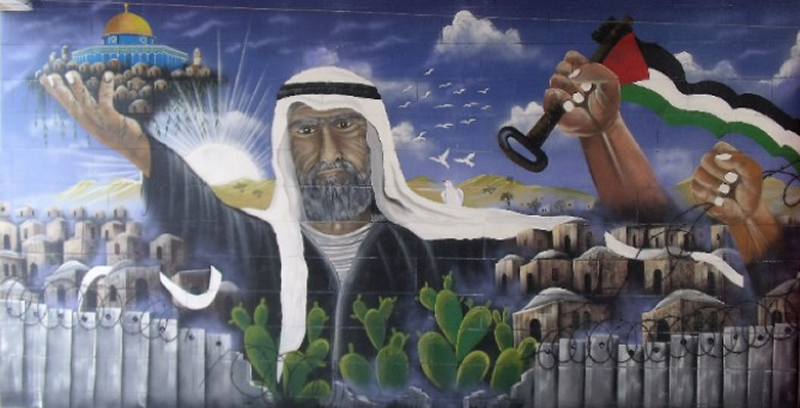 Israel has been brilliant over the years in shaping and misdirecting the public discourse on the future of Palestine. Among its earliest achievement along these lines was the crucial propaganda victory by having the 1948 War known internationally as the “War of Independence.” Such a designation erases the Palestinians from political consciousness, and distorts the deeper human and political consequences of the war. Language matters, especially in vital circumstances where there are winners and losers, a reality that applies above all to a war of displacement.

It took decades for the Palestinians to elevate their experience of the 1948 war to even the consciousness of those on an international level who supported the Palestinian national struggle for self-determination. Even now more than 50 years after the war, the “Nakba” by which the 1948 war is known to Palestinians remains internationally obscure. The word signifies “catastrophe,” which is associated principally with the dispossession of at least 700,000 non-Jewish residents of Palestine, what became the state of Israel after 1948, and subsequently, with the denial by Israel of any right of return for those Palestinians who abandoned their homes and villages out of fear or as a result of Israeli coercion. This double process of dispossession and erasure was reinforced powerfully by the bulldozing and utter destruction of 400-600 Palestinian villages in the new state of Israel.

Even those who have this revisionist awareness rarely convey a sense of the Nakba as a process, not just a calamitous event. For those Palestinians dispossessed of home, property, community, employment, and dignity, their life, that of their families, and that of subsequent generations has been generally “a living hell” as a consequence of either enduring the misery and humiliation of long-term residence in refugee camps or experiencing the various vulnerabilities and rootlessness of involuntary and permanent exile. In other words, the tragedy of the Nakba began and did not end with the traumas of dispossession, but rather continued in the ordeals that followed, which must be considered as inseparable from the originating catastrophe.

For many reflective Palestinians, the decades since 1948 have intensified the ordeal that followed from the struggle for control of territory and elemental rights that followed from the UN General Assembly Resolution 181 adopted by a vote of 33-13 (with ten abstentions, one absent) on November 29, 1947. The Israeli mastery of the public international discourse was expressed by dramatizing the Zionist acceptance (as represented by the Jewish Agency for Palestine) of the proposed partition of historic Palestine while the Palestinians, their Arab neighbors, as well as India and Pakistan, rejected it declaring above all that partition without the consent of the inhabitants of Palestine was a flagrant violation of the UN Charter promise of the right of self-determination, entailing peoples choosing their own political destiny.

This clash of attitudes was then interpreted in the West as demonstrating the reasonableness of the Zionist approach to the complexities associated with two contradictory claims of right regarding self-determination and territorial sovereignty. The Zionist/Israeli spin claimed a readiness to resolve the conflict by way of political compromise while contrasting and denigrating the Palestinian approach to the future of the country as exclusivist and rejectionist, even as genocidal, implying an alleged Arab resolve to throw Jews into the sea, a contention that naturally agitated an extremely sensitive post-Holocaust Western liberal political consciousness. A more objective rendering of the opposed viewpoints of the two sides supports a set of conclusions almost totally the opposite of what has been sold to the world by an Israeli narrative of the UN partition initiative and its aftermath that despite these contrary considerations remains dominant.

After an understandable initial Palestinian reflex to repel Jewish intruders intent on occupying and dividing their homeland of centuries, it has been the Palestinians, not the Israelis, who have been proposing a comprehensive compromise and it is the Israelis who, by and large, subscribe to the view that the Jewish “promised land” incorporates the West Bank and the unified city of Jerusalem, and any dilution of these goals would be a fundamental betrayal of the Zionist project to restore fully a mythic “biblical Israel” in the form of a sovereign state. The more ideological Israelis, including Menachem Begin (commander of the Zvai Leumi Irgun, 6th prime minister of Israel, 1977-83) were outspoken critics of partition in 1947, anticipating correctly that it would produce violence, and believing that Israel would only achieve its security and complete the Zionist Project by engaging in military operations with the object of territorial expansion. David Ben-Gurion, the master Zionist tactician and the first and foremost Israeli leader, shared Begin’s skepticism about partition, but favored it for pragmatic reasons as a step toward the fulfillment of the Zionist Project, but not the end of it. Partition was provisional, to be followed by seeking to complete the Zionist agenda, which is precisely what unfolded ever since 1947.

Partition was a familiar British colonial tactic that complemented their “divide and rule” strategy of occupation. It was proposed for Palestine as early as 1937 in the report of the Peel Commission, but in view of the desire for Arab cooperation in World War II, the UK uncharacteristically backed away from their advocacy of partition for Palestine. In a later white paper, the British declared partition to be “impractical” as applied to Palestine, and somewhat surprisingly abstained from the vote on Resolution 181.

At least since 1988, the PLO decided to accept Israel as a legitimate state and offer normalization of relations if Israel followed the prescriptive provisions of UN Security Council Resolution 242, that is, withdrawing to the 1967 green line borders and agreeing on arrangements for an effective resolution of the refugee issue. The Arab Peace Initiative of 2002 added regional inducements to the PLO offer of political compromise, and this too was met by Israeli silence and a lackluster response in the West. The Oslo diplomacy was a one-sided failure. It never produced proposals on the disputed issues in ways that contained any reasonable prospect of bringing the conflict to a sustainable end, while it allowed Israel valuable time to keep expanding their network of unlawful settlements, a form of creeping annexation that served, as well, to make the two-state mantra more and more of a cruel chimera, useful to pacify international public opinion that sought a sustainable peace for both peoples and an end to the conflict.

More objectively considered, these dual reactions to the partition solution can be deconstructed. The Zionist movement at every stage took what it could get, and then went about creating conditions on the ground and diplomatically for getting more, by expanding their political demands and expectations, or as sometimes observed, “shifting the goalposts.” Reliance on such “salami tactics” can be traced back at least as far as the Balfour Declaration when Zionists accepted the terminology of “national home” despite their aspirations from the outset to establish a Jewish state that disregarded Palestinian moral, legal, and political rights. Recent archival research has made it increasingly clear that the real Zionist goal all along was the imagined Israel of biblical tradition, “the promised land” that deemed to encompass all of the city of Jerusalem, as well as the area known internationally as “the West Bank” and in Israel as “Judea and Samaria.”

And with respect to the Palestinian response, initially ardently supported by the entire Arab world, as well as most countries with majority Muslim populations, rejection of the UN approach was based on the extent to which partition bisected Palestine without any process of consent by, or even consultation with, the majority resident population. It was an arrogant effort by the UN, then under Western control, to dictate a solution that was not sensitive to Palestinian concerns or in keeping with the spirit or letter of its own Charter. To treat Palestinian rejection of Resolution 181 as indicative of anti-Semitism or even rejectionism is to accept an explanation of the disastrous legacy of partition that conforms to the Israeli narrative, which misses the real dynamic at work that has kept the conflict alive all these decades. To this day Israel continues to create conditions that diminish Palestinian prospects while subtly depicting the Zionist Project as in reasonable pursuit of previously undisclosed ambitions with greater clarity.

This leads to the central question that also includes reasons why the Israelis did also not want partition, but felt correctly that its provisional and temporary acceptance was a way of gaining more political space both for maneuvering and for showing the world its reasonable face that included a commitment to peace. In contract, the Palestinians felt shut out and humiliated by the way the future of their society was treated by the UN and the West, and yet didn’t want to alienate the international community, especially Washington. This kind of attitude meant lending credence to the 1993 Oslo Framework of Principles, and acting as if the “peace process” had something to do with “peace.” This accommodationist mode of diplomacy practiced by the Palestinian Authority over the course of the last 25 years while Israel annexed and Judaized East Jerusalem and penetrated more deeply into the West Bank created the impression in many circles, including Palestinian and others, that the Palestinian Authority was not nearly rejectionist enough, and either naively playing a losing hand or completely failing to understand the real Zionist game plan.

To circle back to the contention that language is itself a site of struggle, it has become desirable, even now, more than 70 years later, to call the 1948 War by a name that reveals more clearly its essential and flawed character, and this name is The Partition War. Only by such a linguistic move can we begin to understand the extent to which the international community, as embodied in the UN, was guilty of original sin with respect to the Palestinian people, and their natural rights, as well as their legal entitlements and reasonable political expectations. Endorsing the partition of Palestine was what I would describe as a geopolitical crime.

Richard Anderson Falk is an American professor emeritus of international law at Princeton University. In 2008, the United Nations Human Rights Council (UNHRC) appointed Falk to a six-year term as a United Nations Special Rapporteur on “the situation of human rights in the Palestinian territories occupied since 1967. This article originally appeared in his blog, Global Justice in the 21st Century.