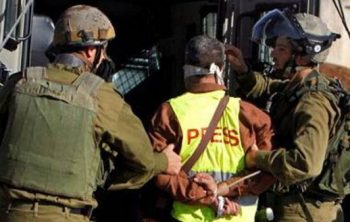 Dozens of journalists, Tuesday, called for the immediate release of Baker Abdul Haq, a journalist working for the Palestinian Broadcasting Corporation (PBC), and demanded an end to violations committed against Palestinian journalists by the Israeli state.

Ahmad Assaf, General Supervisor of the official media, said the detention of Abdul Haq targets the official media institution in specific and the Palestinian media in general, as well as leadership and people.

He said, “Such violations have but only one aim and that is to conceal the truth and silence the voice of the Palestinian people.”

Assaf called on concerned international institutions to assume responsibility and exert more efforts to protect Palestinian journalists and help them face off the many Israeli violations.

Nasser Abu Baker, chairman of the Palestinian Journalists Syndicate, pointed out that they continue to work in order to serve and protect journalists, explaining that last week the syndicate joined a session at the European Union in Brussels and the United Nations Human Rights Council (UNHRC) in Geneva to expose Israeli violations against journalists.

According to WAFA, Abdul Haq was detained on Friday evening, March 23, at al-Karameh/Allenby border crossing, while he was on his way back from Jordan. He had traveled to Cairo to receive a youth award in the field of media.

His detention was extended for 11 days under the pretext of further interrogation, and he was reportedly denied the right to speak to his lawyer.