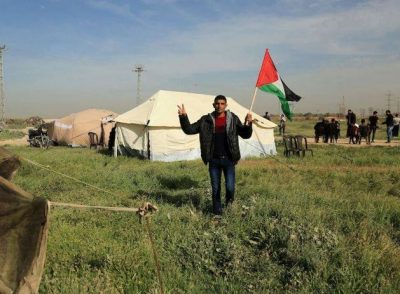 The Cabinet decided to significantly increase military deployments, in addition to using live fire and shoot to kill orders “if the Palestinians breach (or approach) the security fence” in the besieged coastal territory.

The Israeli preparations also include various parts of the occupied West Bank, especially in areas close to its illegal colonies and military bases. Israeli officials have publicly stated that Israeli colonial settlers will be urged to carry their weapons in the area around the protests – despite these settlers having a documented history of excessive violence against Palestinian civilians.

The Israeli army said that its soldiers will use live ammunition, even if it means serious casualties among the Palestinians “should they approach or breach the border fence” in Gaza.

Israeli daily Haaretz said the military has called up snipers and additional units to counter the Palestinian protesters this coming Friday, and added that “military officials are certain the army will be able to prevent the Palestinians from crossing the Gaza border.”

The Israeli Energy Minister, a member of the Likud Party, Yuval Steinitz even proposed that the army should parachute food and medicine over the besieged and impoverished Gaza Strip, “to tempt the Palestinians away from the protests.”

Although the idea was ridiculed by others in the Cabinet, Palestinian commentators have noted that this proposal reveals Israel’s inability to counter unarmed processions – as well as acknowledging the desperation of the population of Gaza due to the decade-long Israeli siege.

The Maan News Agency has reported that senior Israeli military leaders, and Civil Administration officials in the Occupied Territories, have been threatening the Palestinian protest organizers, and mobilizing a massive show of military force. In addition, hundreds of additional soldiers have been deployed near border areas and around various communities in the occupied West Bank, especially in occupied Jerusalem.

Israeli sources said the army has decided to deploy additional battalions and Border Police Units in addition to dozens of snipers along the border on Friday, with the stated objective of “preventing the Palestinians from crossing the fence.”

The protests, which will start on Land Day on Friday March 30th, are expected to continue until May 15th, a day marked by the Palestinians as the Nakba (Catastrophe) Day 70 years ago, in 1948, when historic Palestine fell under Israeli occupation.

This is the date that the state of Israel was established after hundreds of villages, and towns, were destroyed and depopulated, and hundreds of thousands of Palestinians were displaced, creating the largest and longest-lasting refugee population on earth.

Amer Shreiteh, a member of the Coordination Committee of the “Great Return March, said the protests would take off from five areas in the Gaza Strip, starting Friday at ten in the morning from the tents that were installed in Rafah, Khan Younis, Central District, Northern District and near Beit Hanoun (Erez) Terminal.

e added that protests would be unarmed, nonviolent, and that the Palestinians are demanding the internationally guaranteed Right of Return of all refugees, as stated in Article 4 of UN Resolution #194.

Shreiteh stated that the United Nations has affirmed this right 130 times, and that the protesters will gradually and nonviolently march towards the border fence.

He said that the Palestinians are not seeking confrontation, and will be nonviolent, parallel with many processions will also be held across the West Bank, and various countries, especially in Le “There are 1.300.000 refugees living in very difficult conditions, and extreme poverty in the Gaza Strip alone,” Shreiteh stated, “We want our rights; we want to return, we want the implementation of International Law.”

It is worth mentioning that the committee said that the protests in Gaza will be held more than 700 meters away from the border fence, which is even a larger distance than the restriction zones declared by the army.