After 36 days, Body of Palestinian Shot & Beaten to Death Returned to Family in Jericho 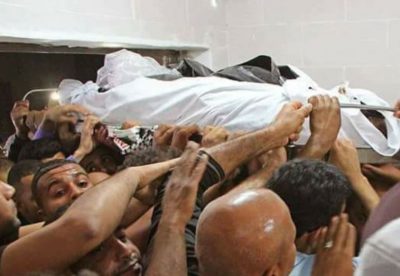 On Wednesday evening, the Israeli military returned the body of a Palestinian man who was killed in Jericho by a group of Israeli soldiers who shot the unarmed man at point blank range and beat him repeatedly until he died. The military initially lied about the circumstances of Yassin Saradeeh’s death, but a surveillance video was released by a local business that captured the entire incident on film.

After holding his corpse for 36 days, the military turned the body over to family members at the Jericho checkpoint, where hundreds of Palestinians gathered to mourn his death and to challenge the circumstances in which he was killed.

Yassin Omar Saradeeh, 33,was killed on February 22nd by Israeli soldiers who shot him, then beat him repeatedly while he was lying on the ground.

According to witnesses, Yassin heard a commotion at his uncle Khamis Hattab’s house at around 4:00 in the morning, and rushed to see what was going on. The soldiers ambushed and shot him, then beat him up, including hitting him with their rifles.

The Israeli army abducted the severely wounded Palestinian, and several hours later, said that he died from his wounds.

Ismael al-Masri, Yassin’s brother-in-law, said that a group of soldiers jumped at Yassin, and started beating him up on various parts of his body, including his stomach and back, and dragged him away.

It is worth mentioning that a surveillance video of the attack shows a muzzle flash the moment the soldiers jumped at the young man, just as they began to beat him. The video shows 6 Israeli soldiers attacking Yassin and brutally beating him up using their riffles’ butts and feet.

The Palestinian Center for Human Rights (PCHR) called for an immediate and impartial investigation into the circumstances of his death, expressing concerns that the Israeli forces might have tortured and beaten him while in custody, leading to his death.

At approximately 09:30 on the same day, the family received a phone call from the Palestinian Military Liaison telling then that the Israeli Liaison informed them of the death of their son, which the army claimed was due to gas inhalation and seizures.

His family said to PCHR’s fieldworker that their son had not suffered from any health issues before his abduction.

PCHR noted in their report that Palestinian civilians who are abducted by the Israeli military are frequently subjected to severe beating, physical and psychological torture, and inhumane and degrading treatment.

Forensic pathologist Dr. Rayan al-Ali, who participated in the autopsy of Yassin, said that the Palestinian man was killed by a bullet in his abdomen, which was fired at point-blank range.

The bullet, which struck Yassin, cause massive internal bleeding, and severed the left common iliac artery, then exiting through his back.

The autopsy also revealed multiple fractures in the pelvis, in addition to various cuts and bruises indicative of having been beaten.

According to the Muslim religion (which is the religion of the majority of Palestinians), a person’s body must be buried as quickly after death as possible, in order for that person’s spirit to be at peace. But the Israeli authorities have prevented the burial of the following 17 people, some of whom have had their corpses frozen in an Israeli morgue for nearly two years: