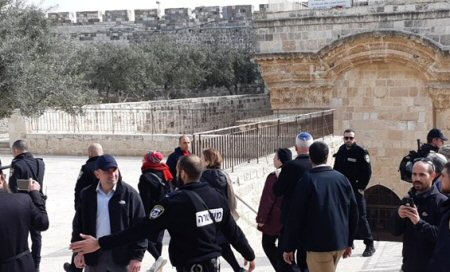 Head of the public relations office at the Islamic Endowment Department, Firas al-Dibs, said that Ariel was heading a group of Israeli settlers into the Al-Aqsa compound via the Moroccan Gate, which has been under Israeli control since the occupation of Jerusalem City.

Al-Dibs pointed out that Ariel took footage of the al-Rahma Gate (Gate of Mercy) prayer area that was opened recently.

The prayer area of the al-Rahma Gate was closed on Monday evening, upon order by Israeli Prime Minister Benjamin Netanyahu, and reopened on Tuesday Morning.

Israeli police forces, who were deployed around al-Rahma prayer area since the early morning hours, took footage of Palestinian guards who opened the area.

The number of Israeli MK’s who storm the Al-Aqsa Mosque compound has increased, over the past few months, after Israeli Prime Minister Benjamin Netanyahu decided to lift a ban that would previously not allow Israeli Knesset members to visit the compound every three months, after incursions were banned in October of 2015.

Netanyahu allowed members of the Knesset, mostly right-wing extremists, who support the demolition of the Islamic holy site in order to build a Jewish temple, instead, to visit the Al-Aqsa compound once every three months.

After Netanyahu lifted the ban, Palestinian Authority (PA) spokesman Youssef al-Mahmoud spoke out about the decision to lift the ban, calling it a “serious provocation” and “encouraging harm to one of Islam’s holiest sites.”

However, in the past two months, MKs such as Shuli Mualem, Yehuda Glick, and Uri Ariel have repeatedly entered the compound, violating the “every three months entry”, according to Ma’an.