Israeli Missiles Injure Four, Including A Husband And His Wife, In Gaza 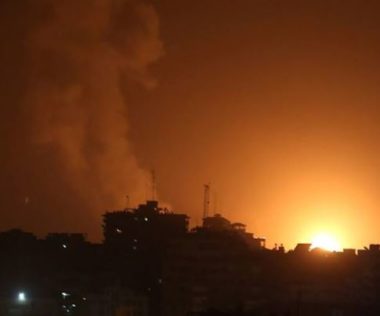 The Israeli army has announced it fired missiles against 100 targets in several parts of the Gaza Strip, in a serious violation that led to excessive property damage, and despite military claims of “targeting Hamas sites,” a husband and his wife were among four Palestinians injured.

The Al-Quds brigades, the armed wing of the Islamic Jihad, declared a state of readiness among all its fighters, and vowed “fierce retaliation.”

“It seems that the enemy has mistaken our silence for idleness,” the brigades said in a statement, “This enemy needs to get the message straight; we will not be silent while it targets our people and continues its aggression, escalation.”

On its part, the Popular Resistance Committees said that the resistance will not allow Israel to turn Gaza into the battle field as part of its corruption and election campaign. Israel is scheduled to hold general elections on April 9th.

“We will defend our people, and we will not remain silent,” it added.

According to a statement by the Israeli army, four projectiles were reportedly fired from the Gaza Strip into Sha’ar HaNegev Regional Council of Settlements, while the Iron Dome interception system managed to strike three of them.

Although Hamas, and other armed resistance groups in the besieged Gaza Strip, have completely denied any relation to the reported shells, the Israeli army and the political leadership in Tel Aviv, held the movement responsible for the escalation.

Israeli daily Haaretz has reported that, for the first time since the Israeli war on Gaza in 2014, two rockets, reportedly originating from Gaza, were fired at Tel Aviv, and “apparently landed in open areas, causing no damage or injuries.”

Haaretz has confirmed that the army attacked 100 targets overnight, “in response for two rockets fired at Tel Aviv.”

It added that the last time the rocket alerts were activated in Tel Aviv was two years ago, and “turned out to be a false alarm.”

Meanwhile, the Israeli missiles struck many civilian, and armed resistance sites in several areas in the coastal region, including near the new port, west of Khan Younis, and another site in Rafah, in the southern part of the Gaza Strip, in addition to the al-Waha naval area, northwest of Gaza city, two other naval sites, in Beit Lahia, in northern Gaza.

Media sources in Gaza said the Israeli missiles also struck homes and other civilian property, wounding a man and his wife, in Rafah, and two civilians in Gaza city.

In addition, the Palestinian Security Forces have evacuated all centers in the Gaza Strip as Israel might strike them.

When Israel started the bombardment of Gaza, late on Thursday at night, the missiles struck seven different locations, including a wedding hall in Khan Younis.