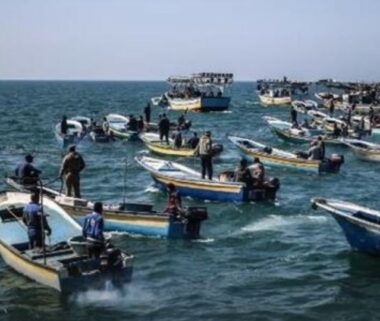 Eyewitnesses said the navy ships, sailing west of Rafah Port, fired a barrage of live rounds and gas bombs at the boats.

They added that the attacks caused damage but did not result in casualties and forced the fishermen to leave to avoid further Israeli violations.

Earlier Tuesday, Israeli military vehicles, including bulldozers, invaded Palestinian lands near the perimeter fence east of the central district of the besieged Gaza Strip and bulldozed them.

The invasion is the second in the same area since Monday. On the same day, the soldiers attacked Palestinian fishing boats in the Gaza territorial waters near the shores of the northern and southern parts of the coastal region.

Last Saturday dawn, Israeli navy ships attacked many Palestinian fishing boats with live fire, gas bombs, and flares near the shores of Khan Younis and Rafah in the southern parts of the besieged and impoverished Gaza Strip.

A week ago, Friday morning, Israeli soldiers fired many live rounds at Palestinian shepherds on lands near the fence, east of Khan Younis, in the southern part of the Gaza Strip.

On Thursday, the soldiers invaded agricultural lands in the central and southern Gaza Strip and bulldozed them.