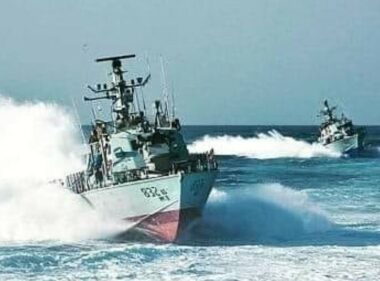 Israeli navy ships opened fire, on Wednesday morning, at several Palestinian fishing boats, and confiscated two, in Palestinian territorial waters near Rafah, in the southern part of the Gaza Strip.

The Union for Agricultural Works Committees stated that the Israeli navy ships fired many live rounds at the Palestinian fishing boats less than seven nautical miles from the shore near Rafah.

It added that that the navy used water cannons while chasing the boats, in addition to firing many rounds of live ammunition, causing damage.

The Union stated navy confiscated two small boats that were docked west of the Rafah Seaport, bringing the number of confiscated boats this month alone to three.

Two days ago, the navy fired many live rounds at several Palestinian fishing boats in the Sudaniyya Sea area, northwest of Beit Lahia, in the northern part of the coastal region.