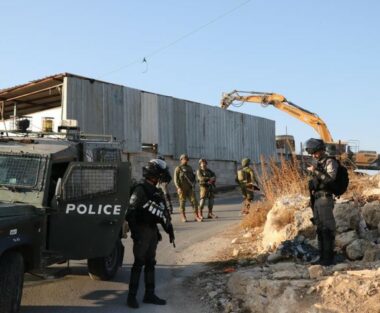 Mo’taz Bisharat, a Palestinian official who monitors Israel’s colonialist activities in the Northern Plains, said several Israeli army jeeps, and a big truck, invaded the village and confiscated agricultural tools, and tents, used by the shepherds in the area.

The soldiers interrogated the Palestinians, and took their ID cards, in addition to confiscating their agricultural supplies and tools, used by the shepherds to plow lands, build sheds and barns for their livestock.

On Wednesday at dawn, the soldiers abducted four Palestinians, including two children, from their homes in Qalqilia and Bethlehem, in the occupied West Bank.

In Hebron, in southern West Bank, the soldiers abducted four Palestinians from several parts of the governorate.

Also at dawn, the soldiers abducted eight Palestinians and assaulted one causing various wounds, in the Jenin governorate, in northern West Bank.