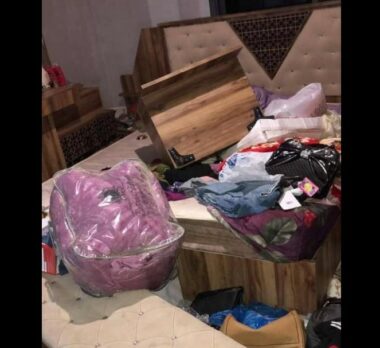 Media sources said several army vehicles invaded Bir al-Basha village, southwest of Jenin, before storming and ransacking the homes of the brothers and relatives of detainee Yacoub Qadri, who was one of six detainees who managed to escape from the heavily fortified Galboa’ Israeli prison before they captured a week later.

The sources added that the soldiers abducted Laith Hamza Ghawadra, and Mohammad Ghawadra, the brother of detainee Yacoub Ghawadra, after storming and ransacking their homes, causing serious property damage.

The soldiers also invaded the home of Ali Ghawadra, 63, the brother of Yacoub, and violently searched the property, leading to serious damage, and assaulted him causing serious cuts and bruises, before Palestinian medics rushed him to a hospital in Jenin.

In addition, Israeli military helicopters were seen flying over the meadow of Marka village, near Bir al-Basha, before landing and deploying many soldiers in the area.

The soldiers also invaded the villages and towns, of Ya’bad, Arraba, Kafrit, Arrana, and Deir Ghazala.

On Tuesday evening, the soldiers abducted a former political prisoner from Marka village, south of Jenin, and confiscated a bulldozer near Hebron, in southern West Bank.