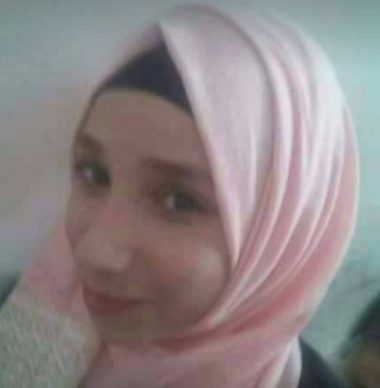 Updated: On Sunday afternoon, Israeli police shot and killed a 16-year old Palestinian girl near the Damascus gate in Jerusalem.

Although the Israeli police spokesperson claimed that the teen attempted to stab a security officer, that account has been disputed.

The child has been identified as Fatima Afeef Abdul-Rahman Hajiji, 16, from Qarawat Bani Zeid village,  northwest of Ramallah, in the central part of the West Bank.

Eyewitnesses said Fatima was standing near the entrance of Bab al-‘Amoud (Damascus Gate), and was at least ten meters away from the near soldier or officer, and that one of the soldiers started shouting “knife, knife,” before five soldiers fired a barrage of bullets at the child. They added that the Fatima was first shot with several live rounds in the chest, and the soldiers continued to fire at her after she fell onto the ground.

Many live rounds also struck a Palestinian Taxi, parked nearby, causing damage and puncturing one of its tires.

Photos of the deceased show that she was shot and killed at quite a distance from the guard post, so even if she had been holding a knife (which is disputed), no security officers were in danger at the time when she was killed. Following the fatal shooting of the child, the soldiers used pepper-spray against dozens of Palestinians who gathered in the area, especially close to Fatima.

In addition, the soldiers assaulted many Palestinians, including children, in Sultan Suleiman Street, causing a child, identified as Mahmoud Abu Sbeih, 9, to fall from a high altitude after mounted officer chased him and many other Palestinians.

Hundreds of soldiers and mounted police officers were deployed in the area, closed many roads and alleys, and forced the Palestinians away.

Seven children and 13 adult Palestinians have been killed by Israeli forces since the beginning of 2017. Although Israeli officials claim that most of these cases involved Palestinians attempting to attack Israelis, there have been multiple occasions, documented on camera, in which Israeli soldiers planted knives on or near the bodies of Palestinians they had killed.

Since October 2015, Israeli soldiers, settlers and police have killed 262 Palestinian civilians. 41 Israelis have been killed in the same time period.