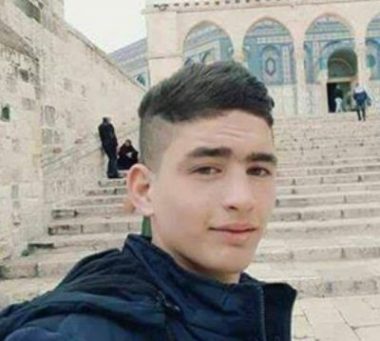 Israeli police officers shot and killed, on Saturday afternoon, a Palestinian teenage boy from Nablus, in the northern part of the West Bank, after he reportedly stabbed a police officer and two other Israeli settlers, in the al-Wad Street, leading to the Al-Aqsa Mosque, in occupied East Jerusalem. The army later forced all stores shut, and abducted 20 Palestinians, including 17 merchants.

The slain teen has later been identified as Ahmad Zaher Fathi Ghazal, 17, from Nablus city, while Israeli sources said that one police officer, was moderately injured, and two Israeli civilians, 18 and 23 years of age, suffered mild wounds in the incident.

Israeli daily Haaretz quoted the police claiming that “the suspect stabbed two persons, and ran away before trying to hide in a residential building where he was chased by the police and injured an officer during an ensuing struggle, before another officer shot him dead.”

Following the incident, the soldiers closed Bab al-‘Amoud, leading to the Sahera Gate and al-Waad Street, before calling for reinforcement, and imposed a tight siege in the area, preventing the Palestinians, including journalists, from entering.

Clashes later took place in the area, before the soldiers and police officers abducted 20 Palestinians, including 17 merchants, and forced all Palestinian stores shut.