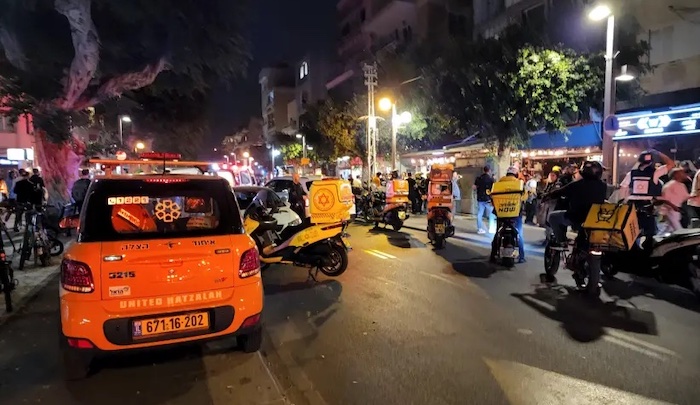 A Palestinian man who Israeli police believe was responsible for a shooting attack in Tel Aviv on Thursday was shot and killed by Israeli forces before dawn on Friday.

The Israeli forces had searched the city for hours after a man shot and killed two Israelis and wounded 8 others in a mass shooting in Tel Aviv.

They located 29-year-old Ra’ad Fathi Hazem, from Jenin refugee camp, near a mosque in Jaffa (the Palestinian city that was originally located in the place where Tel Aviv was built by Israeli colonizers and is now considered a ‘suburb’ of Tel Aviv).

The shooting took place at two locations on Dizengoff Street in Tel Aviv, which is a street with several bars and restaurants.

One of the Israelis killed in the attack was identified as 28-year-old old Tomer Morad, originally from Kfar Saba. Morad was an employee at Ilka Bar, on Dizengoff Street.

Update: On Friday, Barak Lofen, 35, died at the Sourasky Medical Center from serious wounds sustained during the shooting. Israeli sources said Lofen was a former Olympian kayaker and represented Israel in the 2008 Beijing and 2012 London Olympics.

Originally from Kibbutz Ginossar, Barak lived in Givat Shmuel, and was a married father of five three children.

According to Israeli sources, when he was discovered, Hazem fired ten bullets toward the officers who found him hiding near the mosque, and the Israeli police officers then shot and killed him.

Israel Police Chief Kobi Shabtai told reporters after Hazem was killed on Friday, “After a difficult night, and after long hours of joint activity by the Israel Police, the Shin Bet, and the [Israeli military], we succeeded this morning, in operational and intelligence cooperation, in closing a circle and eliminating the terrorist by exchange of fire. We emphasized that no matter how much it takes, we will catch the terrorist, alive or dead, and indeed the contact this morning was a quick and determined response from the Shin Bet and YAMAM fighters in Jaffa.”

Following the shooting attack in Tel Aviv, Israeli authorities called up hundreds of special forces soldiers, many of whom lined areas near the Wall that Israel has constructed to separate and annex Palestinian land. They were there to prevent Palestinians from crossing through from the West Bank into what is now Israel.

Palestinian President Mahmoud Abbas denounced the fatal shooting and said, “the killing of Palestinian and Israeli civilians will only lead to further deterioration,” and added, “We are seeking stability, especially during Ramadan and the upcoming Jewish and Christians holidays.”

He added that the ongoing Israeli invasions into the Al-Aqsa Mosque and the escalating provocation by the illegal colonizes and the policies will only lead to further tension and instability.

“Only real and comprehensive peace will lead to stability,” Abbas said, “this is the shortest and safest road to security, peace, and stability, not only for the Palestinians  and the Israelis but also to the entire region.”