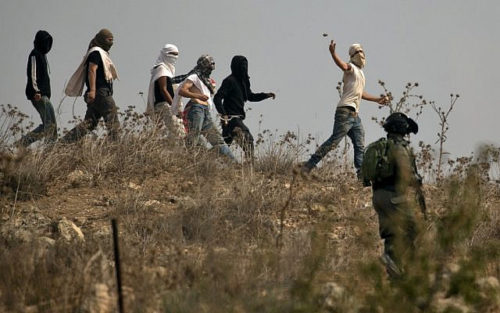 In the town of Huwwara, south of the northern West Bank city of Nablus, Ghassan Daghlas, a local monitor of settler violence, told WAFA that a group of colonists from the illegal Yitzhar settlement, threw rocks at farmers as they picked their olive harvest, injuring three of them.

Two of the injured were identified as Mayor of Huwwara Nasser al-Huwwari, and Deputy mayor Kamal Odeh.

At the same time, another group of settlers stole the olive harvest of Palestinian farmers near the village of Deir al-Hatab, to the east of Nablus city.

Daghlas confirmed that a number of Palestinian farmers entered their olive groves in the area of Ras Hazem, near the illegal settlement of Alon Moreh, but the Israeli settlers had stolen their harvest and destroyed some of the olive trees.

He condemned the settlers’ attacks against olive harvesters, which often occurs under the watch of Israeli soldiers, a policy in place not just to discourage Palestinians from tending to their farmlands, but to effectively force them to leave the area and give up on their land.

Over the past four weeks, the West Bank has witnessed an increase in the number of settler attacks, as Palestinian farmers began the year’s olive harvest.

Attacks were mainly in the vicinity of the illegal Israeli settlements in the West Bank districts of Nablus, Salfit and Bethlehem.

The most devastating attack occurred on the morning of 16 October when more than 30 masked armed settlers charged at Palestinian farmers and international volunteers in Burin, attacking three internationals and seriously injuring one, including 80-year-old Rabbi Moshe Yehuda from the Rabbis for Human Rights organization.

Palestinians look forward to the annual olive harvest season, which is a major income source for thousands of Palestinian families in the West Bank.

In addition to stealing olive harvest from farmers, many areas planted with olive trees are closed to farmers due to their proximity to Jewish settlements or fall behind the Israeli apartheid wall.

Extremist Israeli settlers’ violence against Palestinians and their property is routine in the West Bank, with over 600,000 colonists live in Jewish-only settlements across occupied West Bank in violation of international law.