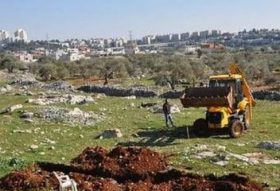 A number of extremist Israeli settlers invaded, on Wednesday morning, Palestinian agricultural lands, in the al-Khader town, south of Bethlehem, and bulldozed them while many soldiers were deployed around the area.

Hasan Brejiyya, representative of the Popular Committee against the Annexation Wall and Colonies in Bethlehem, told the WAFA Palestinian news agency that the Israeli colonizers invaded approximately 15 Dunams of Palestinian lands, and started bulldozing them.

The lands are located near the main Hebron-Jerusalem road, close to the Daniel illegal Israeli colony, and are owned by Palestinians from the Salah family in al-Khader. The colony itself was also built on illegally confiscated property.

Brejiyya added that the uprooting of the Palestinian lands is part of the project Israel is planning, which includes the construction of a synagogue. Some Israeli groups presented the structural plans for the new project, but it was halted after appealed were filed against it.

On Wednesday at dawn, the soldiers kidnapped three Palestinians; two in Beit Fajjar town, south of Bethlehem, and one in Hebron.