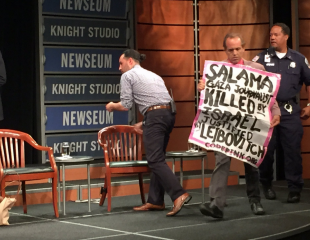 Former Israeli military spokesperson Avital Liebovich has called Palestinian journalists ‘terrorists’ and has promoted the massive Israeli military invasions of Gaza in 2008-9 and 2012, in which hundreds of children were killed, as ‘justifiable self-defense’. She was the guest of honor at an event Monday at the ‘Newseum’, a museum honoring journalism, in Washington DC.

Liebovich’s speech was interrupted by protesters from CodePink who got on stage behind her and held up signs with the names of several Palestinian journalists who were slain by the Israeli military in Gaza.

In 2012, Liebovich published a letter in the New York Times attempting to justify the Israeli military’s targeting of journalists, writing, “Such terrorists, who hold cameras and notebooks in their hands, are no different from their colleagues who fire rockets aimed at Israeli cities and cannot enjoy the rights and protection afforded to legitimate journalists”.

The protesters attempted to point out the irony of honoring a government official who tried to justify the killing of journalists at a museum devoted to journalism, but they were escorted out of the room before they could make that point.

In the question-and-answer session with Liebovich, a number of journalists in the room took issue with her attempts to justify assassination of journalists, including Max Blumenthal and Rania Khalek, who questioned the Newseum’s decision to host Liebovich.

According to a report in Alternet, Max Blumenthal, senior editor for AlterNet’s Grayzone Project and a journalist who covered Israel’s 2014 assault on Gaza, challenged Leibovich citing statistics showing that Israeli forces killed most or all members of scores of innocent families in the Gaza strip in its military assault during the summer of 2014. Israel’s 51-day military assault on the Gaza strip killed at least 2,145 Palestinians, the vast majority civilians and at least 578 of them children.