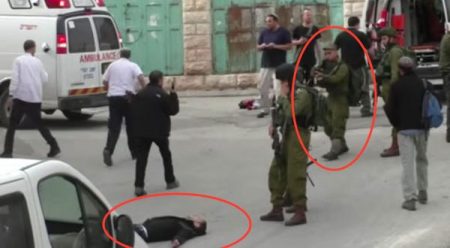 An Israeli military court has just announced its verdict, against 19-year-old Israeli soldier Elor Azaria, who shot dead a disarmed and wounded Palestinian, of manslaughter.

Azaria’s sentence will be decided within a month, according to the PNN.

On 24 March, 2016, Abdul-Fatah al-Sharif, aged 21, was killed by the last bullet as he lay helpless on the ground. The bullet was fired by Azaria.

The outrageous execution was filmed by activists from the Israeli human rights group B’Tselem , and sparked international rage.

Al-Sharif and another Palestinian his age were shot as they allegedly lunged at an Israeli soldier guarding a checkpoint in Hebron, in the occupied West Bank.

In the video, a combat medic, later identified as Elor Azaria, raises and aims his rifle, and a shot is heard. The Palestinian’s head jolts, and he suddenly has what seems to be a fresh head wound.

The defendant has previously claimed that Al-Sharif was wearing a bomb belt as a reason for the shooting. However, prosecutors cited “contradictions” in his testimony, since an officer had earlier carefully turned over al-Sharif and his companion, to check if they were wearing bomb belts, AlJazeera reported.

According to Al Jazeera network, Sharif’s parents said they will not accept anything other than a guilty verdict and a life sentence.

Several Israeli parties immediately condemned the verdict, saying that Azaria should be pardoned.

Azaria’s attorney said that they “will study the verdict but will definitely appeal.” Meanwhile, the right-wing Jewish Home party said that the Israelis expect Minister of Defense Avigdor Lieberman to “stick to his promises and lead to immediate pardon.”

In turn, Lieberman said: “It is a harsh verdict ..but all who approve or disapprove, like myself, should respect the verdict.”