Israeli Soldiers Abduct 10 Palestinians, Including A Child, In The West Bank 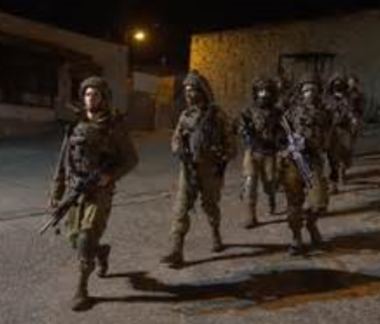 Israeli soldiers abducted, Sunday, ten Palestinians including a child, from their homes in several parts of the occupied West Bank, including occupied East Jerusalem, and confiscated surveillance recordings and equipment in Hebron.

It is worth mentioning that the soldiers repeatedly assaulted Ahmad Sleibi, and his brother, Ra’fat, before abducting Ahmad.

The soldiers also confiscated surveillance recordings and equipment from homes and shops in Hebron.

In Tulkarem, in northern West Bank, the soldiers abducted a child, identified as Mos’ab Abdul-Qader Abu ash-Shawareb, 14, from his home.

In Occupied Jerusalem, the soldiers abducted Mo’men al-Hasheem, 19, from his home in Bab Hotta, and summoned Ayham Sharifa, 18, in addition to Amjad Abu Sneina, 23, for interrogation.