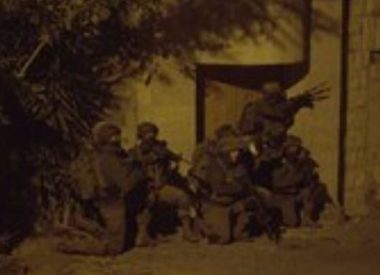 Israeli soldiers have abducted, overnight and at dawn Monday, at least twenty-two Palestinians, from various areas, in the occupied West Bank, and violently searched dozens of homes, the Palestinian Prisoners’ Society (PPS) has reported.

The Hebron office of the PPS, in the southern part of the West Bank, said the soldiers invaded and searched homes in Surif and Beit Awwa towns, and abducted two Palestinians, while a third was taken prisoner at a roadblock in the city.

The soldiers also abducted Morad ‘Ashour, after stopping him at a military roadblock, in Abu Sneina neighborhood, in the center of Hebron city.

The soldiers also assaulted a Palestinian journalist, identified as Khaled Mohammad Bushnaq, 39, causing many cuts and bruises, and forced him to remove his clothes in the cold, under the allegation of searching him.

In addition, a large military force invaded Barta’a town, isolated behind the Annexation Wall, southwest of Jenin, and the Industrial Zone, and violently search many stores and buildings, after breaking into them.

Media sources in Jenin said the violent invasions, and searches, were carried out by the soldiers while a military helicopter flew overhead.

It is worth mentioning that Aseeda is a former political prisoner, who was frequently abducted and imprisoned by Israel, and was only released from a detention center less than three months ago.

In a statement, the Israeli army said its soldiers have arrested twenty-two Palestinians in the West Bank districts of Nablus, Jenin, Qalqilia, Ramallah and Al-Biereh, Jerusalem and Hebron.

Furthermore, Israeli military bulldozers destroyed a drinking water pipeline, providing the villages of ‘Atouf and al-Hadeediyya, in the West Bank’s northern plains, with the needed water.

Mo’taz Bisharat, a Palestinian official at the governate office in Tubas and the northern Plains, said the Israeli attack left more than 47 families without water.

He added that this was the second attack of its kind, carried out by the soldiers in the area, since the beginning of this year.

In related news, Israeli navy ships opened fire on Palestinian fishing boats Gazan territorial waters in Rafah, in the southern part of the Gaza Strip, and near the coast northwest of Gaza city.