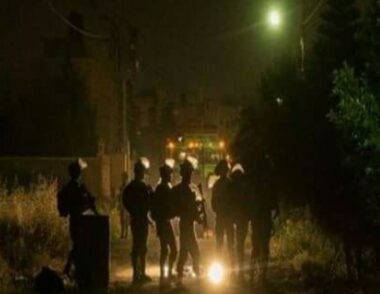 Israeli soldiers abducted, on Tuesday at dawn, at least 24 Palestinians from their homes in various parts of the occupied West Bank, including the occupied capital, Jerusalem.

In Jenin, in northern West Bank, the soldiers invaded the Zababda town, south of the city, searched homes, and abducted a former political prisoner, identified as Mohannad Khaled Sharqawi.

The soldiers also interrogated many Palestinians while searching and ransacking their homes in Kufur Qaddoum.

In Tulkarem, in northern West Bank, the soldiers abducted Saleh Mansour, 28, from his home in the eastern neighborhood, and fired many live rounds and gas bombs at local youngsters who protested the invasion.

In Hebron, in southern West Bank, the soldiers abducted eight Palestinians, during extensive and violent searches of homes across the governorate.

In addition, the army installed roadblocks on roads leading to Sa’ir, Halhoul, ath-Thaheriyya, and Ethna towns, in addition to the al-Fawwar refugee camp and Hebron’s northern road, before stopping and searching dozens of cars and interrogated many Palestinians while inspecting their ID cards.