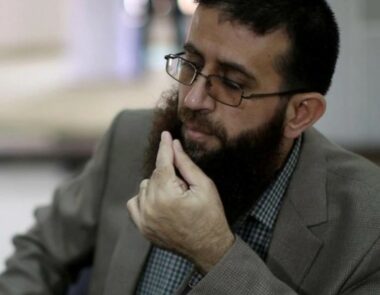 Political prisoner held by Israel, Khader Adnan, 43, has declared a hunger strike the day he was abducted by the soldiers on May 30th, the Palestinian Prisoners’ Society (PPS) stated Tuesday.

The PPS said that Adnan, from Jenin in northern West Bank, is protesting his arbitrary arrest and imprisonment.

It added that the Salem Israeli military court has extended his detention until the seventh of June, although no charges were brought against him yet.

It is worth mentioning that Adnan was abducted and imprisoned by Israel twelve times, spending close to eight years in prison, mostly being held under the arbitrary Administrative Detention orders without charges or trial.

During his repeated imprisonments, the detainee held three hunger strikes, protesting being held under the Administrative Detention orders and being forced into solitary confinement.

During the 58-day hunger strike, Adnan’s health seriously deteriorated after he stopped taking supplements that help him survive the long fast. Before ending his strike, he had begun to show serious symptoms such as vomiting blood.

The detainee is a married father of nine children, the youngest is a newborn (just one month old) and the oldest is 13 years of age.