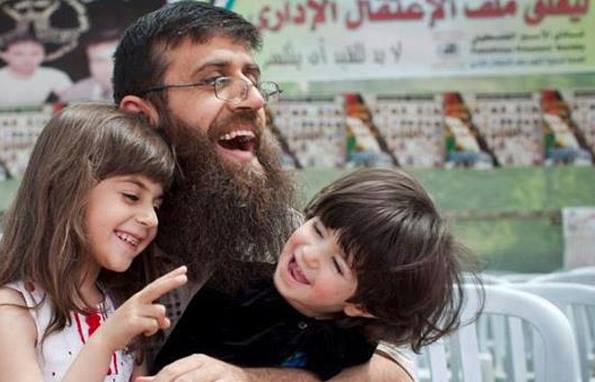 Following an assessment on Saturday that long-time hunger striker Khader Adnan was near death, Israeli authorities finally reached a deal with the ailing prisoner and agreed to release him on July 12th.Taking to Palestinians and Israeli activists who gathered just meters outside of Adnan’s hospital room in the Assaf HaRofeh Israeli Medical Center, Adnan’s lawyer confirmed the agreement, and said “Adnan has taken his first sip of milk after 54 days of hunger striking, following an official written agreement for his release on July 12, 2015.”

“Khader Adnan is sending his greeting to you all, every man and woman, every person who supported him, and those who gathered here; he was very moved when you were chanting for him and for his release,” the lawyer said, “He sends his regards to the Palestinian people in Jerusalem, and historic Palestine, and every person who supported his struggle, he wishes to see you all in his home in ‘Arraba Jenin, once he is released.”

Following the agreement, Adnan’s wife said she managed to visit her husband, who appeared to be very week physically due to his extended hunger strike, but was filled with determination and steadfastness.

“His steadfastness has led to this deal for his release, a deal based on his legitimate demands,” she added, “This was the first day that we managed to visit Adnan, and stand by him, we want to thank all solidarity activists, and every Palestinian.”

The 54-day hunger strike by Khader Adnan, and other similar long-time hunger strikes, have drawn attention to the Israeli practice of holding Palestinian prisoners without charges, often for years on end, under a practice euphemistically known as ‘administrative detention’.

While the Israeli authorities did not agree to end the practice of administrative detention (one of the demands of the hunger strikers), they did agree to release Adnan unconditionally, and not to detain him again.

Adnan has been hospitalized for the past three weeks, and has refused all food, drink, and in recent days even water.

His family was allowed to visit him on Sunday for the first time in the 54 days since his hunger strike began, and his wife was reportedly “horrified” by his near-death condition.

She decided to remain outside the prison hospital rather than returning home, and stage a 24-hour a day vigil until her husband’s release.

Qaddoura Fares, the head of the Palestinian Prisoner Society, told reporters from the Israeli Haaretz newspaper, “When she saw him and his serious condition, she decided that she isn’t going home until he is released. She understands that his condition is very serious, and that’s why she’s appealing to everyone, including the diplomatic community stationed in the Palestinian Authority and in Israel, to work to end Adnan’s administrative detention. You can’t hold a human being without trial until he dies.”

The order allowing force-feeding came largely in response to Adnan’s hunger strike, and was extremely controversial when it passed.

The Israeli Medical Association refused to support the measure, saying that its doctors would not participate in force-feeding, which is considered torture under international law.

Khader Adnan agreed to start taking fluids and then food after the deal was reached for his release. Israeli authorities have abducted Adnan nine separate times, each time holding him without charge.

They claim that he has some connection with the resistance group Islamic Jihad, but have never offered evidence.

Three years ago, while under administrative detention for the 8th time, Adnan underwent a 66-day hunger strike, after which he was eventually released under a deal.

However, that deal did not include a promise from the Israeli authorities not to re-abduct him.

Israeli authorities have agreed to release Khader Adnan, a Palestinian administrative detainee who has been on a hunger strike for the past 54 days.

Adnan will be released in two weeks, and will gradually begin to eat and drink in the meantime.

Earlier on Sunday, Adnan’s wife and six children were allowed to visit him in Assaf Harofeh Hospital Sunday for the first time since he began his hunger strike 54 days ago, after his condition took a turn for the worse.

A friend of the family said that Randa Adnan left the room horrified, saying that she felt her husband was going to die. She said she planned to stage a vigil in front of the Tzrifin hospital and called on Arab MKs to support her and her protest.

The head of the Palestinian Prisoner Society,
Attorney Jawad Boulus, Adnan’s lawyer, did not succeed in reaching an agreement on terms for his release with the head of the military prosecution, Lt. Col. Maurice Hirsch.

The negotiations began 11 days ago, after both sides made compromises: The state dropped its demand that Adnan stop his hunger strike before the discussions began, while Boulus dropped the demand for Adnan’s immediate release. Randa Adnan said her husband would have stopped his hunger strike Sunday if an agreement had been signed.

Adnan has been hospitalized for three weeks; for much of the time he has been shackled to his bed in accordance with Israel Prisons Service instructions and with the hospital’s agreement, despite the protests of the Red Cross, his lawyer and Physicians for Human Rights. Last week his arm was freed and Sunday the restraint was removed from his leg.

Three policemen are in his room around the clock, according to two Israeli anti-occupation activists who visited him.

Adnan refuses to take water or minerals, and refuses to be examined by any physician – not from the prisons service, the hospital or even one from Physicians for Human Rights.

Medical literature indicates that after the 42nd day of such a hunger strike there are liable to be life-threatening complications.

The Shin Bet security service believes Adnan is an active member of Islamic Jihad. He was placed under administrative detention for Altogether he has spent more than six years in Israeli detention.

On Saturday, Boulus said Adnan was liable to die at any moment. “Khader doesn’t want to die and Israel is not interested in his dying,” Boulus told a press conference, expressing the hope that an agreement leading to his release would not come too late.