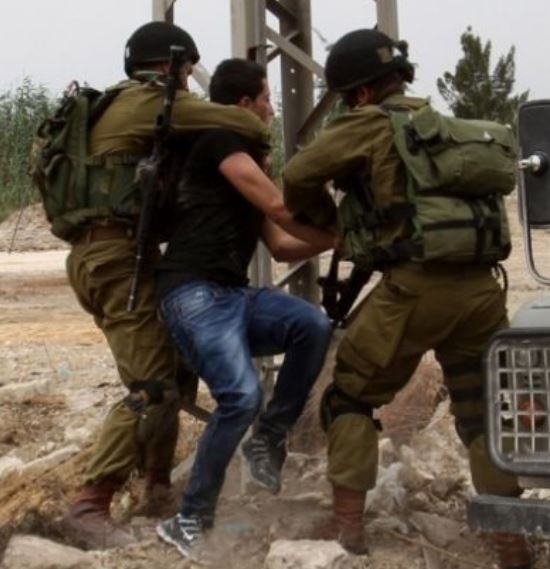 Israeli soldiers kidnapped, Monday, five Palestinians, including a child and a former political prisoner, in different parts if the occupied West Bank and Jerusalem. The Israeli army claimed the child “carried an automatic weapon.” Several Israeli military vehicles invaded Tal Village, southwest of the northern West Bank city of Nablus, and kidnapped two young men after breaking into their homes, and violently searching them while interrogating the families.

The kidnapped have been identified as Mo’taz Ahmad Ramadan, 22, and Nabil Ibrahim ‘Aseeda, 19 years of age.

The family of the kidnapped Palestinian said the soldiers confiscated Mo’taz’s personal computer, and his mobile phone.

‘Obeidi is a former political prisoner who spent nine years in Israeli prisons and detention centers.

In occupied Jerusalem, soldiers kidnapped a Palestinian child, 15 years of age, after stopping him on the military roadblock in front of the Shu’fat refugee camp, and took him to an unknown destination.

In a statement to the press, the Israeli army claimed the child “carried a light-weight Carl Gustav automatic weapon.” The child was moved to an interrogation center in Jerusalem.

Another Palestinian, identified as Ahmad Salah Juneidi, 20 years of age, was kidnapped after the soldiers invaded his family home, in Ras al-Joura neighborhood, in the southern West Bank city of Hebron.