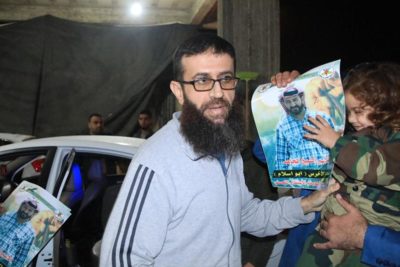 After a 58-day hunger strike which included several days of refusing water as well as food, Khader Adnan has been freed from Israeli prison.

This was Adnan’s third such hunger strike – in 2011 he engaged in a 66-day long hunger strike, and in 2014 he again undertook a ‘hunger strike to the death’ of 55 days. He became a symbol of Palestinian hunger-striking prisoners and their steadfast resistance to the horrific conditions and brutality of Israeli detention facilities.

Adnan has been repeatedly imprisoned by Israeli authorities, who accuse him of being a member of a ‘banned organization’, Islamic Jihad. But he has never been accused of engaging in any violent action or taking part in armed resistance, simply of being considered a ‘security risk’, which has landed him in prison for months and even years at a time without specified charges. He has spent a total of eight years in Israeli prisons.

This most recent imprisonment lasted eleven months, with no charges filed against him. He is one of hundreds of Palestinian prisoners held without charges under so-called ‘administrative detention’, in which Israeli authorities imprison Palestinians indefinitely with no charges or access to a legal system of trials and appeals.

On October 28th of this year, after 57 days on hunger strike, Adnan announced that he was going to stop drinking water. He went into negotiations with Israeli authorities soon after, who agreed to release him if he ended his hunger strike.

Informed sources told the Palestinian Information Center (PIC) that  Adnan was released after 11 months of administrative detention, which was seen as sufficient by a military judge, who heard the case in late October after Adnan decided to give up drinking water.

During the 58-day hunger strike, Adnan’s health seriously deteriorated after he stopped taking supplements that help him survive the long fast. Before ending his strike, he had begun to show serious symptoms such as vomiting blood.

Adnan, aged 40, from Arrabeh village in the West Bank, told his lawyers and visitors that he went on hunger strike to obtain his freedom. The 58-day open-ended hunger strike was in protest of his detention without trial and the renewal old fabricated charges against him.

He ended his hunger strike following promises to hold a hearing for his case and to halt the renewal of his detention.

Since the beginning of his the strike, Adnan was subjected to abusive measures. He was isolated, moved from one detention center to another, deprived of visitation and held in harsh prison conditions.

He is married and is a father of seven children, the oldest of whom is 10 years old and the youngest, Maryam, is 18 months.