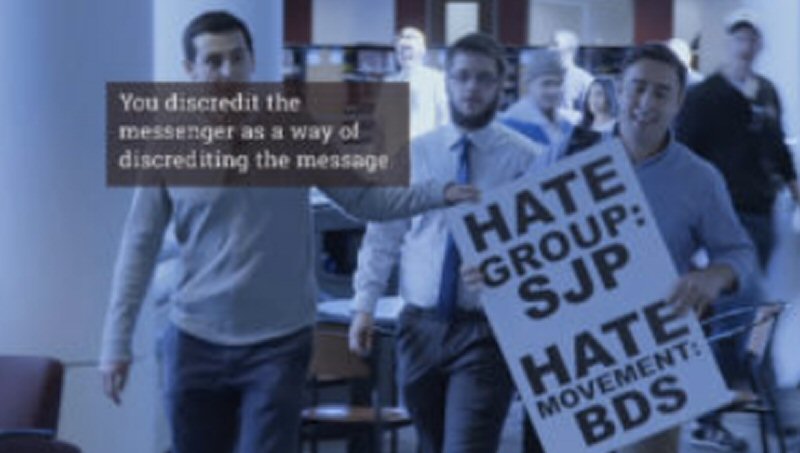 A censored undercover investigation into pro-Israel groups in Washington, D.C. has finally been released to the public, and we’re joined by the editor of the website that made this exclusive documentary public to the world. It was originally produced by Al Jazeera, and Al Jazeera’s Department for Investigative Journalism produced two documentaries investigating the Israel lobby; one in the UK, and the other here in the United States. The one about the Israeli lobby in Britain was published in January 2017 and caused a scandal, as it revealed the extent of Israeli interference in internal British politics, and the government’s support to allegedly independent civil society organizations, along with the character assassination of British politicians whom the Israeli government wanted to take down for their criticism of Israel and support for Palestinian rights.

Al Jazeera announced that it had produced a second documentary focusing on the Israeli lobby in the U.S. and its influence inside U.S. politics through a network of organizations pretending to be independent civil society organizations, but that were actually steered by the Israeli Ministry of Strategic Affairs. Although the second documentary in the U.S. had every potential to cause an even greater scandal, Al Jazeera never published it. The documentary was censored by the Qatari government, which funds Al Jazeera. Eventually, however, this four-part documentary series was leaked and is now available to watch in all four parts at the website the Electronic Intifada. Here let’s watch a quick segment that was published by The Electronic Intifada.

That was a clip from The Lobby USA, produced by Al Jazeera, but was censored, and it was actually recently published to the entire world online by the website The Electronic Intifada. And joining us to discuss this scandal is the editor and co-founder of this award-winning online publication The Electronic Intifada. His name is Ali Abunimah. Thanks for joining us, Ali.

BEN NORTON: So, Ali, you’ve written many books; you’ve reported for many years on Palestine. And then, of course, you cofounded this website, The Electronic Intifada. Can you talk about why you had to publish this documentary that was produced by Al Jazeera, and why Al-Jazeera did not publish it?

ALI ABUNIMAH: Well, let me start by saying the reason we could publish it, although that does entail some you know some risk it’s not a risk free enterprise. But the reason we could do it is because we’re independent. We’re an independent publication supported by our readers, and we’re not subject to the same kind of Israel lobby pressure that mainstream media is subject to, and that Al Jazeera was ultimately subject to via the Qatari government, which was bowing to the Israel lobby in order to try to defend and advance Qatar’s interests in Washington.

So that’s the irony of this, is that this documentary really casts light into the dark crevices of how the Israel lobby operates in the United States, including sabotage and smears and media manipulation against college students and activists and professors, and attempts to influence Congress. The irony is that the very same lobby that this documentary exposes was able to prevent it from being aired on Al-Jazeera after Al-Jazeera spent vast resources making it.

BEN NORTON: Yeah, and let’s talk more about what the undercover report reveals. Al Jazeera sent an undercover journalist to join the Israel Project and to report on the clandestine activities of pro-Israel groups in Washington, D.C. The work of these pro-Israel groups in the U.S. is pretty well known, especially groups like AIPAC, the American Israel Public Affairs Committee, along with J Street, which is the kind of liberal version of AIPAC. Both are pretty well known. So what has this Al Jazeera documentary that you published revealed about the Israel Project and other lesser-known pro-Israel groups inside the U.S. political sphere?

ALI ABUNIMAH: Let me say, first of all, that we published it at the Electronic Intifada along with Al Akhbar in Beirut, and the French website Orient XXI. We all decided to publish it more or less simultaneously, Al Akhbar with Arabic subtitles and Orient XXI with French subtitles, to make it as widely available as possible.

But starting in March this year, actually, the Electronic Intifada was the first to report on any of the contents of the film. And in August we followed up with the first leaked video excerpts from the film, and your colleague Max Blumenthal also was able to publish some leaked excerpts back in August at the Grayzone Project. And what the film shows is that- you know, there’s a lot of really gripping detail. I mean, it’s kind of like watching a thriller. So I encourage people to actually watch all four episodes.

But the big picture is that it reveals that a number of major Israel lobby groups, including the Foundation for Defense of Democracies and the Israel on Campus Coalition, are really operating as front groups for the Israeli government in the United States. They are acting as agents of a foreign government without being registered. And that applies not just to the organizations, but to a number of individuals who are seen in the film admitting to coordinating their activities with the Israeli government, including large-scale surveillance and spying on student activists on campus. We have Jacob Baime, the head of the Israel on Campus Coalition, who admits that this is being coordinated with the Israeli Ministry of Strategic Affairs. We have him describing how anonymous websites are put up to smear and intimidate activists. The film tells the story of Bill Mullen, a professor at Purdue University in Indiana, who is the victim of exactly the kind of smear campaign that Jacob Baime described, where a number of anonymous websites went up accusing Mullen falsely of sexual harassment of students. I mean, it was, it was plainly a hoax and fake, but it was an attempt to intimidate and silence this professor who had been very active in the academic boycott campaign. And as Bill Mullen says in the film, when he saw these websites accusing him of this, naming his young daughter- one of the websites even used the name of his daughter- he said, I realized these people would stop at nothing.

And I think that’s really what the documentary shows: the extent to which Israel and its unregistered foreign agents in the United States are prepared to go to smear and silence people for the mere crime of supporting Palestinian human rights.

BEN NORTON: Let’s talk more about that. The clip we showed earlier shows how the Israeli government-backed groups are monitoring SJP. SJP is the largest Palestinian solidarity student organization in the U.S.; it’s Students for Justice in Palestine. We also saw, thanks to the documentary that you published, and also the clips published by Max Blumenthal at the Grayzone Project, we saw that some of these same groups also pressured donors to cancel a Black Lives Matter fundraiser event. So they’re clearly targeting activists who are critical of the far-right Israeli government, its crimes against Palestinians, its, you know, executions of protesters inside the Gaza Strip with a weekly protest going on and the Great March of Return.

So we see that this documentary exposes how these groups are closely monitoring and even spying on activists here in the U.S. So for young students who want to be involved in the Palestine solidarity movement, there is obviously a very big chilling effect. For older activists who have been involved in the movement for years, there still is this very real possibility of having, you know, their personal lives destroyed, their professional lives targeted. So can you respond to what people have to deal with, especially students? I mean, you spoke about some of the professors, but what Palestine solidarity activists have to deal with thanks to this kind of intense surveillance.

ALI ABUNIMAH: Yeah, it can be very intimidating and disruptive on a personal level. And you know, there are certainly stories of students feeling that in the film, and that we’ve also reported on for many years. But I think people should look at the big picture; that this operation the film reveals, that Israel has been spending tens or hundreds of millions of dollars on, Israel and its lobby groups, and people like Sheldon Adelson, Donald Trump’s biggest campaign donor, and people like Adam Milstein, who is named in the film as- he’s an Israeli-American financier, a convicted tax dodger who is named in the film as one of the main funders and founders of the anonymous smear site Canary Mission, which tries to destroy the reputations of college students so that they can’t get jobs.

It is very scary for individuals. But the big picture here is that Israel is losing the support of progressive segments of society, big time. We see that in poll after poll. Just last month there was a poll by YouGov for the Economist that showed a collapse in support for Israel among progressives, among liberals, among younger people, among people of color. And that the strong support for Israel now looks exactly like Donald Trump’s base. It’s white, it’s male, it’s very right wing.

And so I think the film should be seen not so much as a testament to the success of the Israel lobby, but of its failure. The fact that they have had to mount this massive operation, and it has not been able to staunch the hemorrhage of support for Israel, I think really should encourage people that speaking out is the right thing to do. The more normalized that it becomes to talk about Palestinian rights, the less power the smear and intimidation tactics have. So the message I think people should take away is speak up more, not less, because we’re winning.

BEN NORTON: Well, we’ll have to end it there. We were speaking with Ali Abunimah, who is the co-founder and editor of The Electronic Intifada. The Electronic Intifada is an award-winning news website that published this censored Al Jazeera documentary with an undercover reporter investigating the Israel lobby in the United States. Thanks for joining us, Ali.