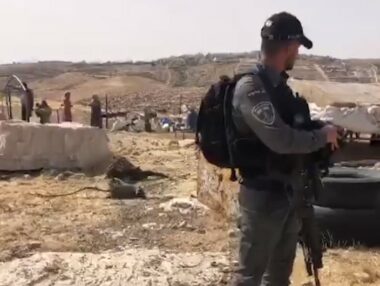 Israeli soldiers invaded, Tuesday, the as-Sammou’ town, south of the southern West Bank city of Hebron, before demolishing a residential tent and two barns, in addition to confiscating solar panels.

Rateb Jabour, the coordinator of the National and Popular Committees against the Annexation Wall and Colonies, said the tent, the barns, and the solar panels, are owned by Ismael Mousa Abu Awwad.

The occupied West Bank was divided into three areas – A, B and C – as part of the Oslo Accords, signed by the Palestine Liberation Organization (PLO) and Israel, in 1993 and 1995.