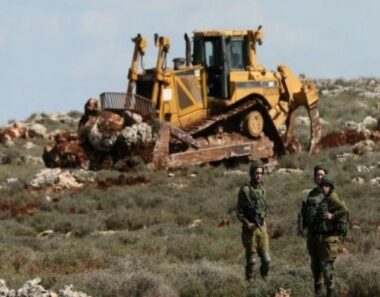 Ghassan Daghlas, a Palestinian official who monitors Israel’s illegal colonialist activities in northern West Bank, said the soldiers started bulldozing the land which belongs to Yitma village, near the roadblock.

He added that bulldozing of the land is part of the colonialist bypass road near Huwwara, south of Nablus, which already led to the illegal confiscation and annexation of hundreds of Dunams of Palestinian lands.

In related news, the soldiers invaded, the as-Sammou’ town, south of the southern West Bank city of Hebron, before demolishing a residential tent and two barns, in addition to confiscating solar panels.