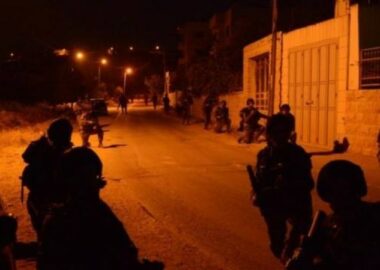 On Monday at dawn, Israeli soldiers abducted at least twenty-seven Palestinians, including siblings, in addition to injuring an elderly man in his home, in several parts of the occupied West Bank, including the occupied capital, Jerusalem.

Several Israeli army jeeps invaded Jericho, in northeastern West Bank, in addition to Ein al-Sultan and Aqabat Jabr refugee camps, and the al-Jiftlik village, before the soldiers stormed and ransacked many homes, abducted ten Palestinians, injured one man in his house, and caused damage to a car.

They added that the soldiers also abducted Mohammad Mahmoud Manasra, Odai Samir Abu Sharar, and his brother Qussai from the Ein al-Sultan refugee camp and Jihad Abdul-Jabbar Bisharat and Laith Nayef Atawna, from the al-Jiftlik village.

During the invasion into Jericho city, the soldiers fired many gas bombs at Palestinian protesters and surrounding homes, wounding Shaker Mousa Balu, 65, in his house before he was transferred to a hospital, in addition to causing damage to one car.

In Salfit, in the central West Bank, the army invaded and searched several homes before abducting Mahmoud Abdul-Karim Mer’ey, 18, and Mosallam Ismael Mer’ey, 18.

During the invasion, the soldiers detained Mohsin Mer’ey, 21, Saher Ibrahim Mer’ey, 19, and Mo’men Jamal Mer’ey, 28, but released him after a few hours of interrogation.

In occupied Jerusalem, the soldiers invaded Qotna town, northeast of the city, searched several homes, and abducted two young men driving their car in the town.

Local sources said the soldiers assaulted the two young men, Omar, and Othman al-Khatib, causing several injuries before abducting them, in addition to causing damage to their car.