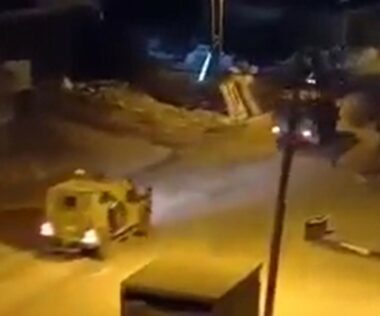 The soldiers were also trying to abduct Tareq’s brother, Khaled; however, he wasn’t home, so the army informed the family that Khaled needed to head to Etzion military base and security center, south of Bethlehem.

The sources added that the soldiers also invaded Marah Rabah village, south of Bethlehem city, and abducted Mahmoud Abdullah Taqatqa, 22, from his home.

The invasion into the small village was carried out by at least six armored military vehicles.

In addition, the soldiers invaded Doha town west of Bethlehem, searched a few homes before detaining and interrogating Abdullah al-Afifi, and released him later.

On Sunday evening, the soldiers assaulted a young Palestinian man in the al-‘Isawiya town, northeast of the occupied capital, Jerusalem, in the West Bank, and abducted him.

On Sunday morning, several Israeli military vehicles, including bulldozers, invaded the village of al-Aqaba, east of Tubas in northeastern West Bank, demolished a Palestinian under-construction home, and abducted one Palestinian.

On Sunday at dawn, Israeli soldiers abducted sixteen Palestinians from the al-Isawiya, at-Tour, and Hizma towns in Jerusalem.