Soldiers Assault And Abduct A Young Man In Jerusalem 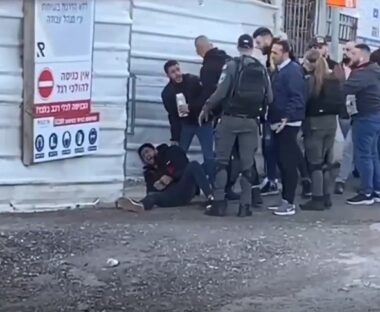 Israeli soldiers assaulted, on Sunday evening, a young Palestinian man in the al-‘Isawiya town, northeast of the occupied capital, Jerusalem, in the West Bank, and abducted him.

Media sources said several soldiers stopped the young man, who remained unidentified at the time of this report, and continuously assaulted him.

They added that several Palestinians tried to stop the soldiers from continuing the assault on the young man before the army took him to an unknown destination.

In related news, the Israeli army released two young men, identified as Omar Shweiki and Adel Ja’bari, after ordering them to pay a five hundred Shekels fine each, the Wadi Hilweh Information Center In Silwan (Silwanic) has reported.

Silwanic added that an Israeli court ordered the two under house arrest for three days; they were abducted by the soldiers, Saturday, from Ras al-Amoud neighborhood, in Silwan town, in Jerusalem.

On Sunday at dawn, Israeli soldiers abducted sixteen Palestinians from the al-‘Isawiya, at-Tour, and Hizma towns in Jerusalem.