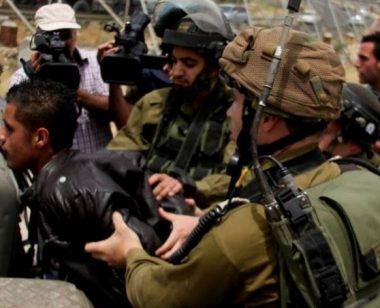 Israeli soldiers abducted, on Monday at noon, five young Palestinian men in Shu’fat refugee camp, in occupied East Jerusalem, bringing the number of abducted Palestinians since dawn hours to 24, including many children.

Media sources in Jerusalem said many several jeeps invaded Shu’fat refugee camp and fired many gas bombs and concussion grenades at many youngsters, who hurled stones at them.

They added that the soldiers abducted five young men and took them to an interrogation facility in the city.

On Monday at dawn, the soldiers abducted nine Palestinians in the West Bank governorates of Nablus, Hebron and Ramallah, in addition to ten Palestinians from Tamimi family, including a wounded child, in Nabi Saleh village, northwest of Ramallah.