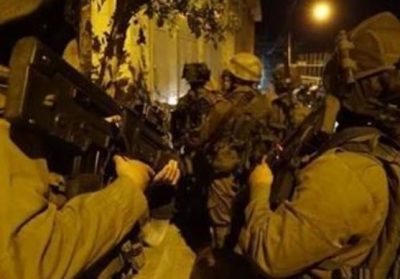 Israeli soldiers abducted, on Monday at dawn, five Palestinians in the northern West Bank governorate of Nablus, two in Hebron, in southern West Bank, and two in Ramallah, in central West Bank, in addition to invading Bethlehem and summoning three young men for interrogation, and searching many homes in Azzoun, east of Qalqilia.

The abductions bring the number of Palestinians, who were taken prisoner by the Israeli army, Monday, to nineteen Palestinians, including children.

The Nablus office of the Palestinian Prisoners’ Society (PPS) has reported that dozens of soldiers invaded many communities in the governorate, searched and ransacked homes, and abducted five Palestinians.

The soldiers also invaded Yatta and as-Sammoa’ towns, and installed roadblocks on the main entrances of Sa’ir and Halhoul towns, in addition to Hebron’s southern road, before stopping and searching dozens of cars, and interrogated scores of Palestinians while inspecting their ID cards.

In Bethlehem, the soldiers invaded the Saff Street area, in the center of the city, searched homes and summoned Abdul-Salam Khader al-Hreimi, 27, Mohyeddin Hassan and Mohammad Suleiman Suman, for interrogation in Etzion military base and security center, south of Bethlehem.

In Qalqilia, in northern West Bank, the soldiers invaded Azzoun town, east of the city, and carried out massive and violent searches of homes, after forcing the families in the cold, and interrogated many of them while conducting intrusive body searches.

Owners of some of the invaded homes have been identified as Mohammad Tabeeb, Fahmi Tabeeb, Saed Tabeeb, Na’el Tabeeb and Mohammad Radwan.

In addition, the soldiers abducted Mo’men Misbah Abu ‘Alia, 28, from al-Mughayyir village, northwest of Ramallah, in central West Bank, and Mohammad Ata Nibali, from the al-Jalzoun refugee camp, north of the city.

Furthermore, dozens of Israeli soldiers invaded Nabi Saleh village, northwest of Ramallah, and abducted a wounded child, and nine other Palestinians, mainly children, from Tamimi family, during extensive and violent searches of their homes.