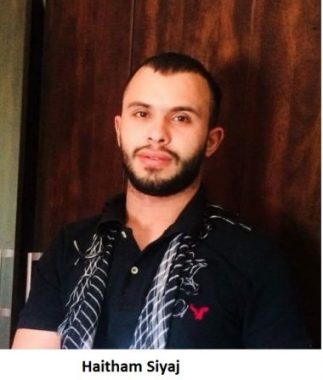 Israeli soldiers invaded, Friday, the al-Khader town, south of the West Bank city of Bethlehem, and abducted a child. The army also abducted two young men near Jenin and Jerusalem.

Ahmad Salah, the coordinator of the Popular Committee against the Annexation Wall and Colonies in al-Khader, said the soldiers abducted Mahmoud Bassam Salah, 14, While standing in front of his home in Umm Rokba area, south of al-Khader.

He added that the soldiers cuffed and blindfolded the child, before moving him to an unknown destination.

In related news, the soldiers abducted a young man, Waseem Morad Rabay’a, from Methaloon town, south of the northern West Bank city of Jenin, while trying to cross the al-Karama Border Terminal, in his way to Jordan.

The soldiers also abducted a former political prisoner, identified as Haitham Siyaj, after stopping his at Jaba’ military roadblock, north of occupied Jerusalem.

Also on Friday, the soldiers attacked Palestinian protesters in Bab az-Zawiya area, in the center of the southern West Bank city of Hebron, shot a young man and caused many residents to suffer the effects of teargas inhalation.

In addition, the soldiers closed all roadblocks leading to Tal Romedia area and the Shuhada Street, in the center of Hebron city, and prevented the Palestinians from leaving the area, or returning to their homes.